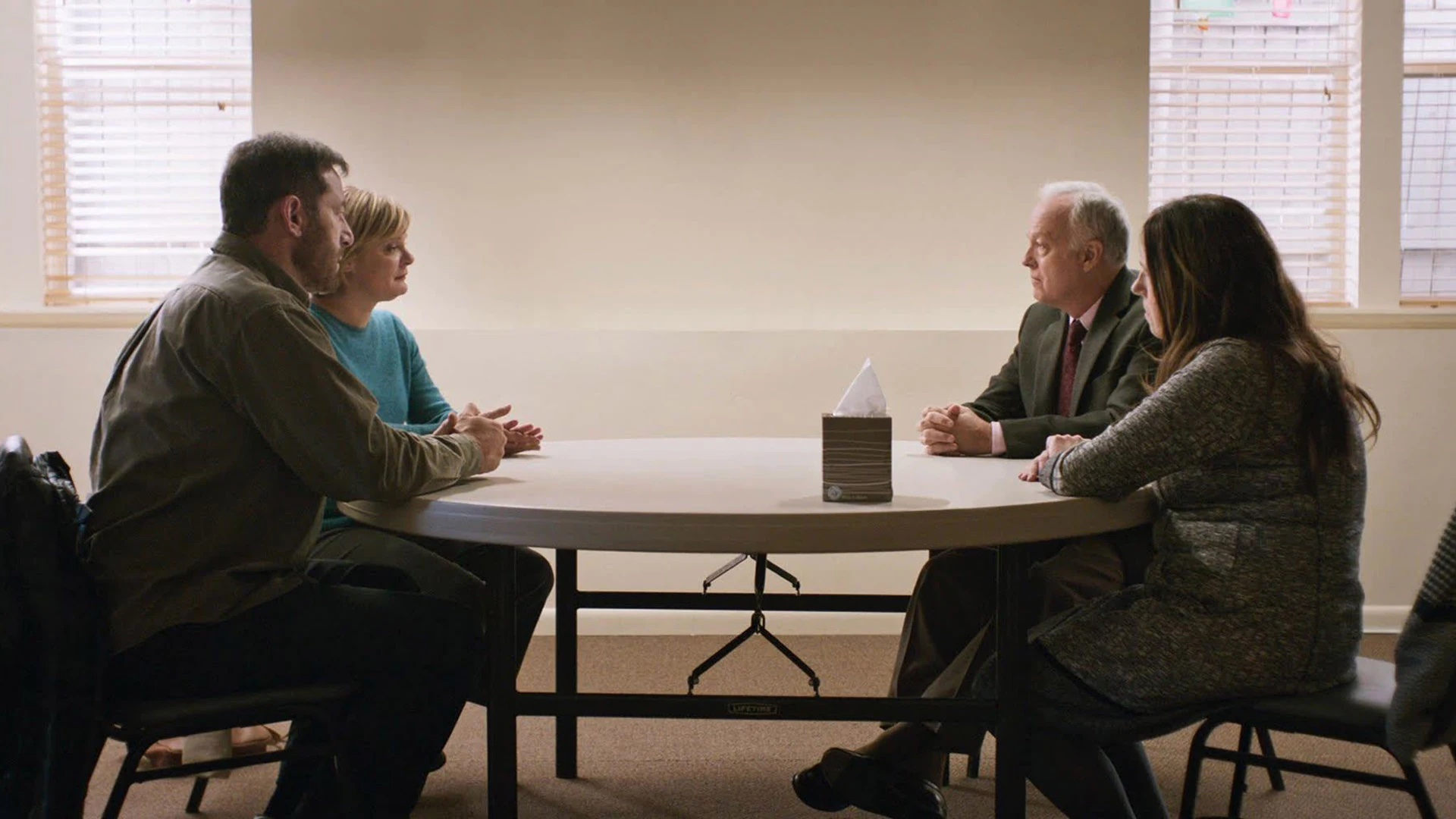 There are no easy answers in Fran Kranz’s Mass – and perhaps no answers at all. One of the strongest debut features to have premiered at last year’s Sundance, it exhibits all of the signs of a very promising career behind the camera lie ahead for the first-time writer-director. Taking place a number of years after a school shooting, Mass brings two sets of parents face-to-face.

Confining them for the most part to a single room, a rec space adjoining an episcopalian church, Kranz seats Gail (Martha Plimpton) and Jay (Jason Isaacs), Linda (Ann Dowd) and Richard (Reed Birney) across a table from one another with an imposing metaphorical elephant between them. Though in introducing his film to Sundance audiences Kranz made it clear that this is a fiction, its brutal subject matter will strike as all too real for bereaved families across the United States, in particular.

There’s no disguising the fact that this is a demanding, harrowing watch. By no means looking to further politicise the issue of gun ownership and control, or the lack of safety in schools, Mass is a small-scale human drama that mines huge personal issues: the psychological trauma and grief of those who are left behind in the aftermath of such events. Kranz’s perfectly measured script reveals the what and the where steadily, allowing his characters adequate time to build up the courage to affront hard truths. And you are unlikely to see another film in 2021, or any year for that matter, that boasts four such extraordinary performances.

Each actor is faultless in their own right, but collectively the effect of their interactions, sniping and vicious stares is, at certain moments, overwhelming. Distinguished by their character’s own standpoint (or rather sitting point) in tackling this arranged meeting, Mass demands our attention as much for the telling mannerisms, hand gestures and expressions that speak as loudly as the words they do – and sometimes don’t – say. Bearing in mind that the great majority of the runtime involves watching four actors seated at a table, eyes that glaze over and redden, the way words are weighed and delivered, the wringing of hands and faces hidden in them, the timing and pauses for breath are all exquisite.

Testament to his cast’s extraordinary talent, no doubt his own experience as an actor, and his directing capability, it demonstrates all elements of Kranz’s film working in perfect sync. Taking turns in picking up the baton to argue their case, say what they have to say while they are able, ask questions that have long needed asking, the why and the how of what these parents have endured is less easy to resolve. Instances of unexpected humour – Jay asking “Do they recycle here?” after downing a bottle of water to relieve a parched throat – and other such breaks in the thick tension allow brief hiatuses from holding our breath. But as emotions and rhetoric escalates towards the film’s final third, cinematographer Ryan Jackson-Healy narrows the screen from top and bottom.

Furthering the claustrophobia of this room and the stakes as the walls close in, it has the dual purpose of focusing the characters’ resolve to attempt to reach some form of a resolution, catharsis. However, such is the fraught, inexpressibly raw emotion at hand here that nothing is assured. Gripping and sincerely moving from first to last, Mass is exceptional filmmaking all-round from Kranz and a stellar showcase for the talents of Plimpton, Isaacs, Dowd and Birney.