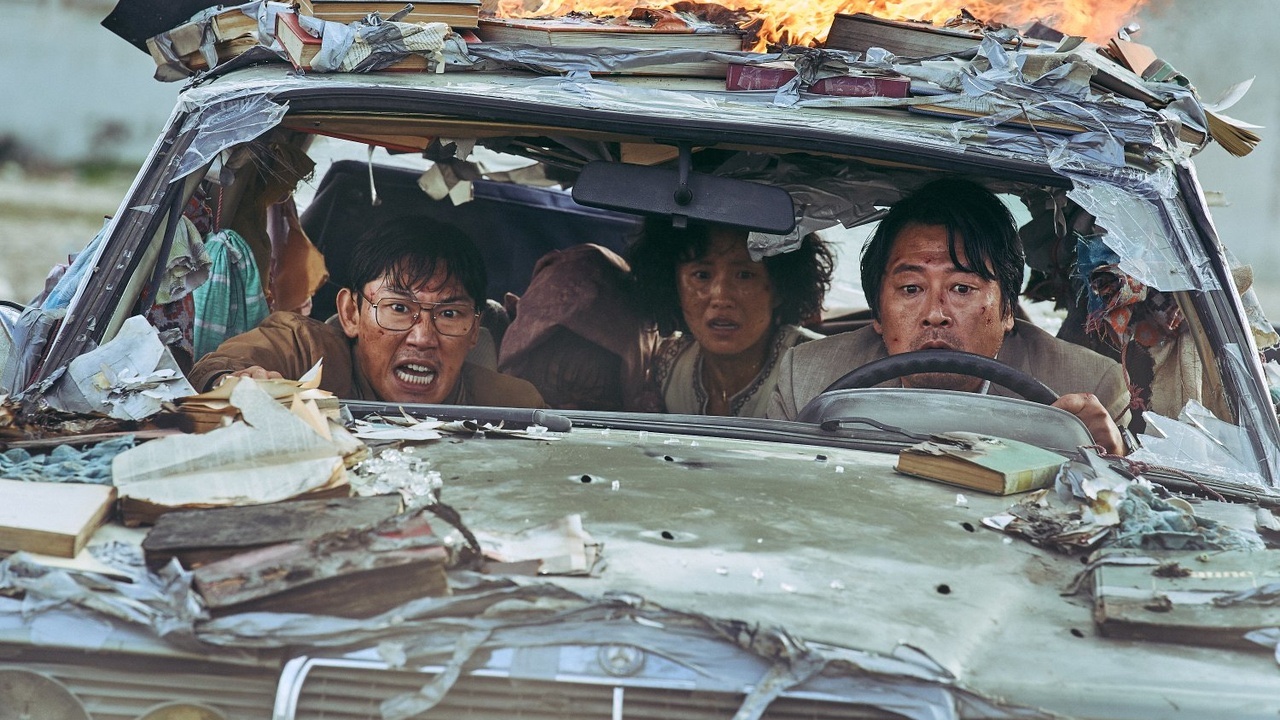 South Korea’s entry for this year’s Oscars race, Ryu Seung-wan’s political action thriller is based on an astonishing true story. Director Ryu is a veteran of this kind of picture – his previous film, The Battleship Island, had a similar ‘escape from’ premise in a period setting – so it’s no surprise that Escape from Mogadishu is a rollicking masterclass in escalating tension.

It’s December 1990 and South Korea are poised to join the United Nations. However, they need to win the votes of the UN members to enter and as Africa has the most votes of all the continents, so the Korean government embark on a diplomatic mission to convince enough countries to vote them in. Next stop: the capital of Somalia, in which Ambassador Han, second-in-command Kim (Jung Man-sik) and Counsellor Kang (Jo In-sung), frantically make nice with the Somalian government while also countering the efforts of the North Koreans, who are petitioning Somalian President Barre to deny South Korea entry to the UN.

Mirroring the Southerners, North Korean Ambassador Rim (Huh Joon-ho) is flanked by Tae (Koo Kyo-hwan), who resembles Kang in physicality and demeanour. There’s a degree of pantomime here, with essentially evil versions of the main characters, though Escape from Mogadishu plays with this device throughout the film, chipping away at assumptions and suspicion on both sides.

There’s a strange but intriguing paradox in the film’s first act between the ostensibly dry premise and its propulsive presentation, foreshadowing the conflict between the diplomacy that Han and his colleagues are pursuing amidst the backdrop of a country moments from falling into civil war. And fall it does, forcing the Koreans – North and South – must retreat to their respective embassies. It’s not long before both come under attack from Somalian rebels so they must form an uneasy alliance to hatch a plan to survive and escape the country.

Much of the film’s success lies in its impeccable structure and pacing, with three clearly defined acts, each ratcheting up the tension. Many of the beats are predictable – Kang and Tae inevitably come to blows while hunkered down in act two – but are so well executed that one can’t help but get caught up. The two sides’ scheming against each other, even in the face of death, is incredibly compelling and even blackly comical in the face of such common danger. Meanwhile, Han and Rim’s frosty animosity, gradually warming to respect and even friendship is surprisingly moving, before the film’s final act snaps open with a thrilling chase through the sacked city streets.

Amidst the bravura action sequences and brilliantly ratcheted tension, Escape from Mogadishu unfortunately has little time for the citizens of Mogadishu or the civil war as anything other than a convenient backdrop. Neither the diplomats nor the film itself are remotely interested in the context of the uprising, President Barre or what the rebels want, while the climactic race to escape, while thrillingly staged, falls back on tired stereotypes of Africans as a scary horde. It’s especially galling when contrasted with the numerous, genuinely harrowing images of innocent people caught in the middle of the violence.

This complaint aside, Escape from Mogadishu is a refreshing riposte to the po-faced equivalents – see Argo – that Western audiences are more accustomed to. It’s a shame that the film is so uninterested in its own setting, especially given that it is based on a still-ongoing conflict, but it remains one of the most entertaining action thrillers of the year.