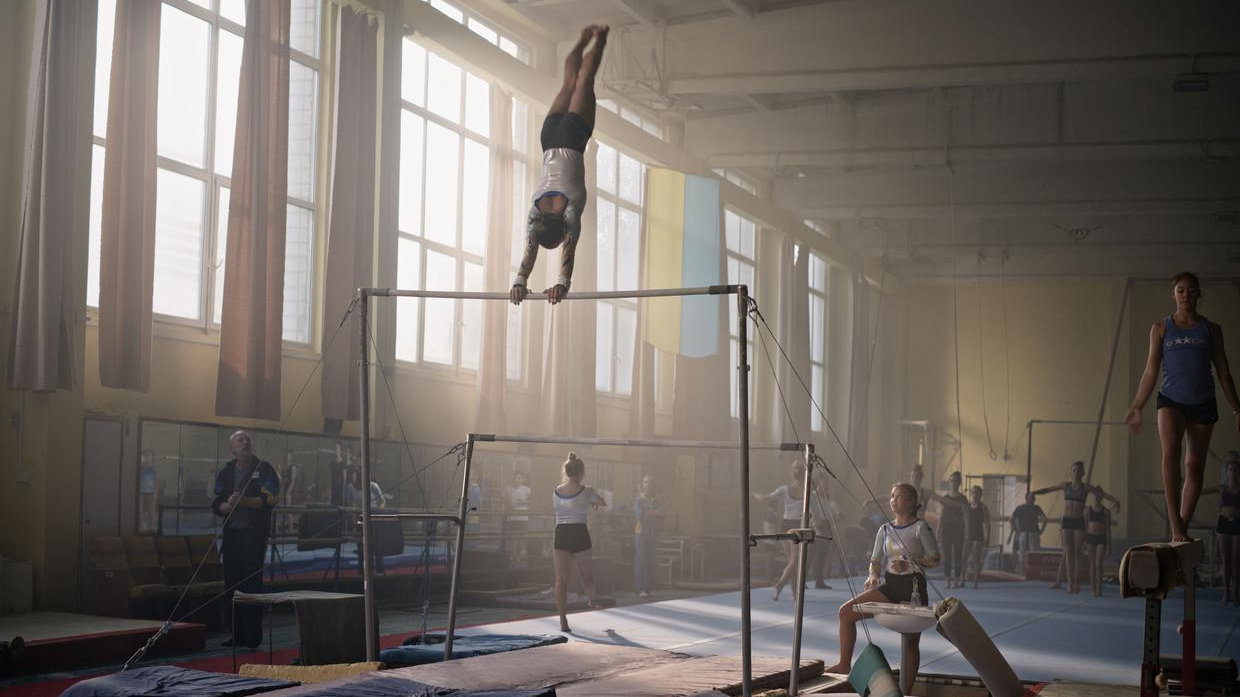 French-born director Elie Grappe’s film about an exiled Ukrainian gymnast, set largely in 2013-14 during the Ukrainian Maidan protests and subsequent revolution, was delayed in 2020 by the Covid-19 pandemic, premiering last year. It’s a deeply bitter irony, then, that the very catastrophe that Olga warns against should only find notice now.

15-year-old Ukrainian gymnast Olga (real-life Ukrainian gymnast Anastasiia Budiashkina, tragically now too in exile) is forced to flee Ukraine to Switzerland to live with her paternal Swiss grandparents after her journalist mother (Tanya Mikhina) is attacked by pro-Yanukovych forces, the Ukrainian President against whom the protests were targeted.

Meanwhile, Olga’s old coach – who has pointedly just defected to the Russian gymnast team – tells her that ‘this is sports, not politics’. Olga’s experience in Switzerland, however, gives the lie to such a fatuous claim. Her guilt at having left friends and family in peril is underscored by pressure from her Swiss gymnast coach to renounce her Ukrainian citizenship so that she can compete in the Swiss team. Politics invariably penetrates every facet of life, even sport.

Yet at the same time, Olga is not interested in proselytising messages or calls to arms. It is at heart a study of the travails of adolescence, captured through Budiashkina’s disarming performing, made all the more astonishing that this is the gymnast’s only acting credit to date. Outwardly downcast and nervous, Budiashkina nevertheless cuts a defiant, stoic figure, routinely ignoring her trainer’s instructions not to practise on her own, and insisting on performing the advanced Jaeger move for the upcoming European Championship. Meanwhile, her burgeoning friendship with Zoé (Théa Brogli) reveals Olga’s buried tenderness.

Cinematographer Lucie Baudinaud shoots in a personal 1.85:1 aspect ratio, favouring handheld medium shots and close ups that are juxtaposed against the broad view of the televised chaos beamed out of Ukraine. A single moment of surrealism, as Olga dreams that her bedroom is consumed by fire, collapses the barriers between the two worlds; fractures across one invariably run into the other. In the face of Western indifference and national tragedy, Olga remains a defiant film. Defiant in its politics, defiant in its tenderness and humanity, and defiantly hopeful for the future. It is a film, quite literally, for this very moment.

But it also captures something universal and timeless as both a bildungsroman and as a study of the ways that politics intersects with everyday life. Politics here is rendered as a distant grand narrative, experience through texts, Zoom calls and newsreels, juxtaposed against the immediate realities of an ostensibly apolitical world, but the film’s thesis is that these distinctions are false. Olga’s final sequences suggest a hope for the future, but there is an underlying irony to the superficially-peaceful imagery, rendered horribly prophetic in the current moment.

For audiences in the West, Olga is an urgent reminder that though global catastrophes can often feel far away, the horrors of Ukraine, not to mention those playing out in Syria, Afghanistan and elsewhere, inevitably touch us all. The time for Western indifference is over. We must start paying greater attention to world events, we must rediscover our compassion and we must act in unison and solidarity. The world often feels like it is run by bullies. Bullies don’t stop until they are stopped: this is what the war in Ukraine tells us. It’s time to start standing up to the bullies.

If you wish to make a donation to the Ukrainian Humanitarian Appeal, which provides food, shelter and clothing to Ukrainians fleeing the war, please visit the Disasters Emergency Committee page here.