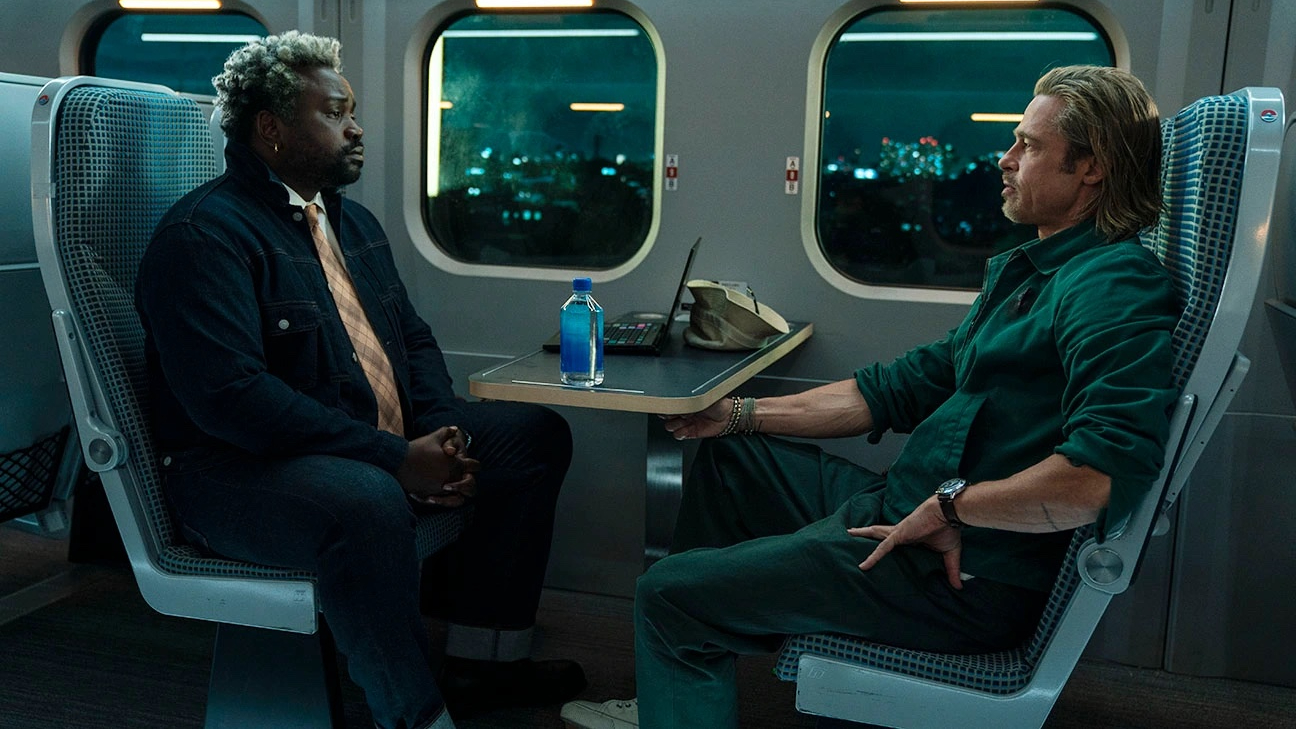 Based on Isaka Kōtarō’s 2010 novel MariaBeetle, Bullet Train comes thundering out of the station, a runaway delight of forward momentum, style and excess. Directed by the man behind John Wick, Atomic Blonde and Deadpool 2, David Leitch once again proves himself one of the most adept action directors in Hollywood.

On the neon-soaked city streets of Tokyo, former hitman Ladybug (Brad Pitt) gets a call from his handler for a job that was meant for a colleague before he called in sick. With any luck, it should be an easy enough gig, a quick grab and run of a briefcase stashed on a train and he’ll be home clear. The only problem is that Ladybug is cursed with misfortune, from losing his ticket to board Japan’s iconic train to the string of complications he encounters along the way.

In possession of the suitcase are Tangerine (Aaron Taylor-Johnson) and Lemon (Brian Tyree Henry – rocking one of the dodgiest British accents of the year), tasked with returning it and the wayward son of their psychotic criminal boss in Kyoto. Meanwhile, Prince (Joey King) stalks Kimura (Andrew Koji), himself on the hunt for the one responsible for the attempt on his son’s life.

Convoluted is not a strong enough word to describe the set up. and that’s before the film starts chucking other assassins and various ne’er-do-wells into the mix. As a consequence, the tracks of the first act buckle under the weight of its plot machinations, the momentum frequently stalling as flashback after flashback whizz by. The candy colours, wacky characters and hyperactive motion threaten to grate, too, with a style that veers towards the try-hard.

But once Leitch finishes assembling his pieces and the thing finally starts moving with a purpose, Bullet Train transforms into an exquisite Rube Goldberg machine, setting up and knocking down proverbial dominoes with such finesse it’s impossible not to be taken along for the ride. Stakes that were baffling just a few minutes earlier start snapping into focus, characters whose intentions were opaque suddenly become crystal clear, cameo after cameo are never less than delightful. And the style that threatened to overwhelm our enjoyment now drives it, heightening the crimson violence into thrillingly kinetic hyperreality.

Bullet Train has its issues: however important to the plot, the first act’s convolutions could have been streamlined. There’s also an uncomfortable strain of exoticism – ticking off just about every Japanese cultural cliché there is – that runs throughout the film. Equally, Prince is the only major woman character and of the few minor other women that turn up none of them interact with each other. These gripes aside, Bullet Train remains one of the giddiest films of the year. The film is essentially one long sequence of Chekov’s guns being cocked and going off one after the other: it’s hardly plumbing the depths of human experience but good grief is it fun.