Starring the voice talents of Anika Noni Rose, best known for her role as Lorrell Robinson in 2006’s Dreamgirls and Bruno Campos, a regular on our TV screens having featured in ER and CSI: Crime Scene Investigation, Disney’s latest animated picture The Princess and the Frog (2009) is in many ways a nostalgic step back into the past.

Stylistically the film imitates Walt Disney’s early hand-drawn classics such as Snow White (1937) and Cinderella (1950) and received three Oscar nominations at this year’s Academy Awards. But does Disney manage to not only revive, but reinvent the old magic of the classic years for a modern age?

Set in the swinging jazz era, directors Clements and Musker paint a bright and vivid New Orleans bursting with life. Here we meet Tiana (Anika Noni Rose), a young black waitress working two jobs, whose only dream is to fulfil her father’s wish and open her own restaurant. With little time for friends or fun, Tiana finally decides to take a break from work and when invited to cater for a function by Charlotte (Jennifer Cody), a wealthy childhood friend, she accepts. The money Tiana is paid is enough for her to purchase a restaurant of her own. 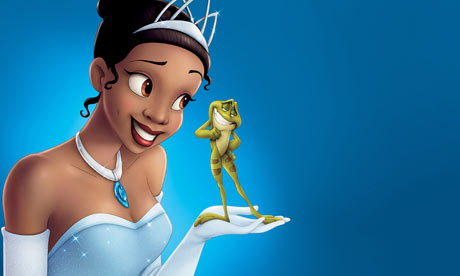 Attending the function is Prince Naveen (Bruno Campos), whose status as a singleton is the focus of Charlotte’s attentions. However, also attending the function are the realtors of Tiana’s new prospective business, who inform her she has been outbid. Tiana is inconsolable, her dreams shattered, all her hard work has led to nothing. After accidentally ruining her outfit in her despair, she retires upstairs to change into a gown and tiara Charlotte lends her. Gazing up at the stars from the balcony, Tiana wishes for help to make her dreams come true like she did when she was young. Much to her surprise, when she again looks down, Tiana finds a leggy green frog has appeared on the balcony next to her – and not only a frog…a talking frog.

Whilst this is a refreshing and fantastic direction for Disney to go down after the numerous Pixar collaborations, the soundtrack is slightly disappointing. The only memorable song is the opening number, ‘Down in New Orleans’. What made Disney’s Beauty and the Beast (1991) and The Little Mermaid (1989) great were their lyrically brilliant scores, and this is where The Princess and the Frog unfortunately falls flat. However, despite this fact, it cannot be denied that at the film’s core lies an engaging tale of romance and adventure, harkening back to the Disney that we all know and love.