Those who’ve heard of The Last Exorcism (2010) will know that the most well-established name attached to it is that of Eli Roth, the once highly-promising writer/director of gory horror Cabin Fever (2002), who has since failed to produce anything of real worth (save, perhaps, for the Thanksgiving mock-trailer for the Tarantino/Rodriguez team up, Grindhouse). However, Roth’s role is thankfully restricted to merely one of The Last Exorcism’s many producers, and one should view the film instead as the low-budget debut from an exciting new director Daniel Stamm, rather than Roth’s latest folly.

Stamm’s horror mockumentray follows disillusioned Southern preacher Cotton Marcus (Patrick Fabian) as he attempts to draw back the curtain and expose the theatricality and artifice behind the supposedly divine act of an “exorcism”, using the case of teenage Nell Sweetzer (Ashley Bell) as the vehicle for this reveal. Is her case true possession? Is her condition a psychosis induced by her overbearing, God-fearing father (Louis Herthum)? How far can we trust our preacher protagonist’s moral code, being someone who lives off the money paid by ignorant believers easily fooled by his smoke and mirrors? 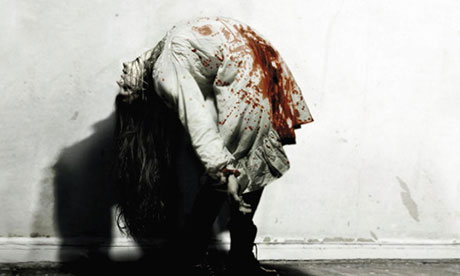 The film begins well with a series of well-executed and tense sequences, but unfortunately, all the promise that The Last Exorcism built up during its first half quickly began to disappear as the film careered towards its rushed, completely over-the-top conclusion. The mockumentray format is certainly used effectively to create plausibility early on, and aids its audience in not only believing on-screen events, but also attaching emotional ties to the film’s well-drawn characters (Fabian is rightly balanced between being approachable and bumptious).

However, the entire film runs so closely in parallel to The Exorcist (1973) – without doubt the most important influence on The Last Exorcism, that I began to wonder why Eli Roth hadn’t just bankrolled a rerelease of Friedkin’s classic. Even The Last Exorcism’s tagline, “If You Believe In God You Must Believe In The Devil” is a converse composition of The Exorcist author William Peter Blatty’s famous explanation of his uplifting intentions with the book (“If one believes in the Devil, one must believe in its opposing force”). In addition, the sound design and effects are painfully similar to Penderecki’s original score.

It may seem churlish in this day and age to fault a film for being unoriginal and derivative, but unfortunately the many, many nods to The Exorcist overpowered the original, admirable elements of The Last Exorcism, leaving me with the distinct, nagging impression of an opportunity sorely missed. Go into the film expecting nothing original, but a pitch-black comedy with some decent scares and you may well emerge satisfied. Just don’t pin your hopes on experiencing anything as mind-blowingly memorable as the first time you saw Linda Blair’s head rotate the full 360 degrees.