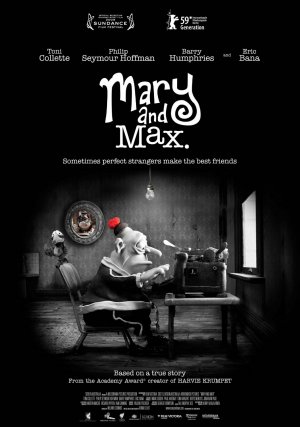 In recent years there has been a rapid decline in the output of clay animation films. This would appear to be due to the huge increase in CGI animation films from Hollywood, such as Disney Pixar’s WALL.E (2008), Up (2009) and Toy Story 3 (2010) to name but a few.

The highly polished, glossy sheen of these films seems to have made the homemade, hand-crafted aesthetic of clay animation a thing of the past. Not, that I am criticising the above mentioned films, on the contrary, I am a huge fan of each, all three being shining examples of just how charming and moving, huge budget Hollywood CGI movies can be when placed in the right hands. However, it is still saddening to see such an imbalance of animation styles on our screens these days.

Thankfully, Adam Elliot’s latest clay animation (“claymation”) or “clayography” Mary and Max (2009) goes someway towards redressing this balance. A film of astonishing beauty, Mary and Max is undoubtedly one of the films of the year. Taking place over the course of twenty years and spanning two continents, the film follows the relationship of pen pals Mary (Toni Collette), an eight year old child from Australia, and Max (Philip Seymour Hoffman), a forty four year old Jewish man living in New York, suffering from Aspergers syndrome. Through this relationship, Elliot explores the film’s central themes of loneliness, mental illness, love and friendship, all with a deft balance of humour, sadness and subtlety. 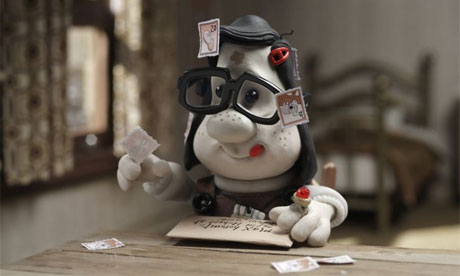 Firstly, the clay animation is absolutely impeccable. With an aesthetic that is deceptively child-like, one could easily overlook just how painstaking a process the animation in Mary and Max must have been. This is certainly to the animators and director’s credit, as the style is never too showy or distracting from the unfolding story. Instead, it draws its audience in delicately, allowing its tones and shades to assist in setting the mood.

The balance between the child-like tone and the film’s adult central themes is superbly offset by the narration provided by Barry Humphries, lending itself perfectly to the style of the animation, and allowing the story to be told in way that would be equally fitting to a child’s fairy tale. This is also true of the vocal talent provided by Toni Collette and Philip Seymour Hoffman as Mary and Max respectively, with each adding an extra layer of depth to their characterisation.

The combination of each of these elements makes for a truly exceptional piece of work. Although there are moments of heart-wrenching sadness and a lingering sense of melancholic loneliness throughout, there are also enough moments of quirky humour and touching tenderness to render Mary and Max, at times both uplifting and heart-warming. The depth and development of each and every character engages with the viewer in a manner, which would usually seem impossible through animation, such is the strength of Elliot’s script.

For me, Mary and Max should be held in the same regard as Tim Burton’s The Nightmare Before Christmas (1993) as a genuine classic of the clay animation genre. As a genre which is growing ever more redundant at the hand of Hollywood studios’ penchant for big budget 3D and CGI animations, gems such as Mary and Max will inevitably become an even rarer commodity in contemporary cinema, which is why everyone should go see this film at least twice! It really is that good.