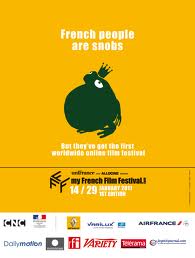 Unifrance, in partnership with Allociné and with the support of the Centre National de la Cinématographie and the Ministry of Foreign Affairs, is organizing the first French online film festival open to internet users around the world. The objective is to take fully into account the evolution of cultural consumption and to reach a new audience for French cinema abroad.

The films will be available by Video On Demand (VOD), in original version and subtitled in several languages (German, English, Arabic, Spanish, Italian, Portuguese, Russian, etc.). Internet users will then be able to vote for their favourite film. Three prizes will be awarded at the end of the festival: a prize awarded by the public, another by foreign bloggers, the third by the international press.

The festival¹s website will be online in December and gives free access to the trailers and to many exclusive online interviews.

Adieu Gary Dir. Nassim Amaouche, with Jean-Pierre Bacri
In a working class city, abandoned by most of its population, some inhabitants stay in spite of everything because they were born and grew up there: Francis, Samir and Sarah (who believes that Gary Cooper is her father and is waiting for him).

Bus Palladium Dir. Christopher Thompson, with Marc-André Grondin.
A rock¹n roll band, a group of friends who have met with success, and a girl who will disrupt it all

Complices Dir. Frédéric Mermoud, with Gilbert Melki and Emmanuelle Devos
Two police detectives are investigating the disappearance of a teenage couple and find themselves confronted with the problems in their own lives.

Espion(s) Dir. Nicolas Saada, with Guillaume Canet and Géraldine Pailhas
A young baggage handler is hired as spy by the French counter-intelligence agency after being involved in spite of himself in an affair involving the explosion of a diplomatic pouch in an airport.

La Famille Wolberg Dir. Axelle Ropert, with François Damiens
Simon Wolberg is the mayor of a small provincial town, loving husband, overbearing father and provocative son. The film recounts the escapades of this man obsessed with his family.

L’Autre Dir. Patrick Mario Bernard & Pierre Tridivic, with Dominique Blanc
Anne-Marie leaves Alex when she realizes they no longer have the same aspirations: he wants to settle down, she wants to keep her freedom. But when Alex finds a new mistress, Anne-Marie becomes crazy with jealousy.

Le Bal des actrices Dir. Maïwenn, with Karin Viard and Charlotte Rampling
A director is shooting a documentary film on actresses. She shows all their personalities: manipulative, fragile, lying, moving, etc. But she quickly gets involved in their little games, for better or worse.

Qu’un seul tienne et les autres suivront Dir. Léa Fehner, with Pauline Etienne and Reda Kateb
Three people are brought together by chance in a prison visiting room: Stéphane who was just offered the deal of his life, Zorah who is trying to deal with her son¹s death, and Laure, who has fallen in love for the first time with a convict.

Tête de Turc Dir. Pascal Elbé, with Roschdy Zem and Ronit Elkabetz
A teenager of 14, an emergency doctor, a cop looking for revenge, a mother fighting for her family, a man crushed by his wife¹s death see their destinies linked after an accident.

Tout ce qui brille Dir. by Géraldine Nakache & Hervé Mimran, with Leïla Bekhti
Ely and Lila are childhood friends living in the Paris suburbs. They dream of entering a world they don¹t belong to, where everything seems to shine like gold.

Classic Film not in Competition

Since 1949, the Unifrance organization has promoted French cinema around the world. It conducts studies to provide French film professionals with a wide range of information concerning the international film market. It also organizes events and festivals to facilitate the exposure of French cinema to new audiences. Lastly, it supports the distribution of French films abroad.

Allociné is the most popular French website for information about cinema. Created in 2003, it provides quick access to a rich database concerning film releases, DVDs and film professionals (directors, actors, etc.)