A challenging book-to-screen adaptation if ever there was one, Mark Romanek’s vision of the 2005 Booker Prize shortlisted novel Never Let Me Go (2010) certainly makes itself an easy target for criticism from fans of Kazuo Ishiguro’s original, haunting masterpiece (adapted for the screen by screenwriter Alex Garland). To judge one incarnation by the standards of the other isn’t fair, but neither is giving credit to this movie for ideas and characters already laid down in writing for the film makers to reproduce.

I read one early review of Never Let Me Go that urged audiences to go to see this film in the same mindset as they would a “foreign film”. I think the writer meant to imply that, whilst the cinematic beauty and subtle emotional nuances of the film are arguably affecting, due to a lack of any tangible narrative or action, we may go away unsure that we’ve understood what it all meant.

A distorted vision of our own reality, Never Let Me Go follows a group of three school children from their idyllic upbringing in an English boarding school, through a confusing adolescence and towards the chilling fate that awaits them in their adult lives.

The sci-fi metaphor, subtly employed as a narrative device by Ishiguro, is here condensed into a set of Hollywood cliches (forced down our throats by the insipid voice-over) presumably in an attempt to ensnare a wider, less intuitive audience. This is one of the film’s main shortcomings: underestimating its audience. The emergent love triangle between the three protagonists is transformed from an indefinable, somewhat awkward journey into a trite and familiar portrayal of childhood sweethearts and unrequited love. 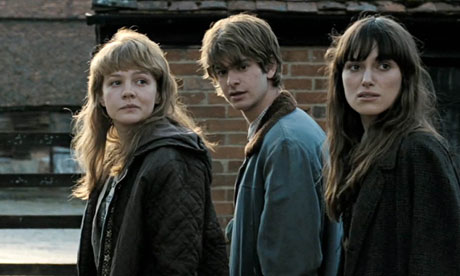 The cast are a mostly capable bunch. Andrew Garfield tackles his character Tommy with confidence, wrestling with a myriad of emotions as the story progresses, even if at times he slides towards a level of comic naivety and innocence that borders on ‘puppy-dog’. Carey Mulligan, in the leading role of Kathy H, is consistent and believable, whilst Kiera Knightley as Ruth, whose casting perhaps owes more to her commercial appeal than to her acting prowess, falls behind the others in terms of emotional conviction or impact.

Much of the story hinges on the depth of the characters: their emotional development and how they reconcile their own fates form the lynch pin of Ishiguro’s overarching moral discourse and are what the film lacks. Tidbits and snippets of more elaborate scenes are thrown in as almost cursory gestures to the source material, rather than for their use in developing the narrative and the overall effect feels more heavy-handed than anything.

Having been rather harsh in terms of script and story, what can’t be faulted in this film is the superb cinematography, which somehow manages to embody the disquieting tone of the novel almost to a tee and elegantly capture the damaged beauty of Ishiguro’s characters’ plight. Kiera Knightley’s somewhat wooden portrayal of the manipulative Ruth is redeemed by her harrowing transformation from a fresh-faced beauty into a tortured and withered shell. Romanek’s visuals are more often than not a major factor in keeping the audience’s attention during scenes which would otherwise fall flat, and even conjure aspects of Ishiguro’s premise with greater impact than his deliberately meandering prose could ever do.

While by no means an unpleasant watch – and, in parts, genuinely moving – Never Let Me Go hardly serves as entertainment in its bleak perspective and intentional lack of satisfying closure. In struggling to meet the profound levels of its literary forbearer, the film finds itself in that unfortunate no-man’s land between light entertainment and high-end art – satisfying neither the movie aficionado nor the casual cinema-goer.