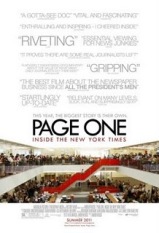 There’s something rather ironic about reviewing a documentary examining the decline of print media on an online movie blog. However, despite the global reach of the internet threatening to turn newspapers into a redundant medium, Andrew Rossi’s Page One: A Year Inside the New York Times (2011) creates a compelling argument to those ready to tighten the noose around the fragile neck of one of the most respected papers of recent American history.

Director Rossi spent 14 months observing the media desk of The New York Times during the worst recession the publishing world has seen. In this time, Rossi witnessed highs and lows, from the Time’s revolutionary collaboration with Julian Assange and WikiLeaks, to the paper’s unfortunate mass layoffs. Plummeting advertising revenue, combined with the rise of digital media has resulted in the US institution being on a constant ‘deathwatch’.

Page One opens with a mesmerising tracking shot of a printing press before transferring to a fly-on-the-wall viewpoint for the majority of the film. This voyeuristic approach allows the audience to become part of the hectic NY Times news room, which leads to an unusual emotional connection towards this famous organisation. Clearly aiming to make the audience appreciate something they’ve always taken for granted, it’s hard not to perceive this divisive method as little more than a crying plea for help from a company whose demise appears imminent. 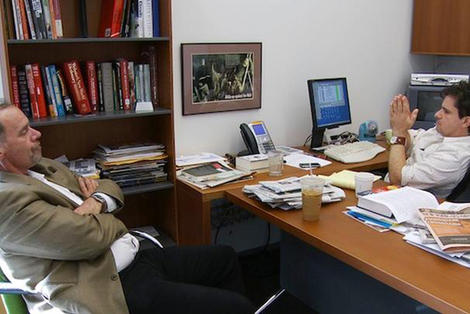 Yet Rossi’s documentary is more an expose of life behind the curtains at The NY Times, rather than a probing investigation into how best to save it. Thrusting the audience into the daily lives of these reporters, Rossi allows us the rare opportunity to put faces to those tiny names in the byline, whilst observing how a story moves from an idea to the coveted front page of the newspaper – in many ways, Page One is not so much an educational voyage into a dying medium, but rather an experience to be savoured.

It’s the appearance of the paper’s media and culture columnist David Carr which helps to turn Page One from a sympathetic film into the hard-hitting, informative and entertaining type of story The NY Times itself has become famous for. Carr’s own journey from drug addiction and incarceration to respected journalist is in itself a metaphor for the resilience of the paper, whilst his reluctance to embrace the digital age highlights the obstacles The NY Times must overcome if it’s to survive.

Carr brings an intoxicating degree of wit and honesty to the documentary. His professional integrity and genuine belief in the paper are what truly draws the audience into the film. It’s not just his aggressive approach to journalism, but rather his ability to begrudgingly accept this inevitable switch away from print, whilst simultaneously decrying it, which makes for the film’s most entertaining moments.

Page One: A Year Inside the New York Times successfully creates an argument that there is still a place in the world for a credible paper like The NY Times. However, far too much of Page One feels like an epitaph for a death which has yet to transpire. The film remains a thoroughly absorbing and surprisingly cinematic effort, but sadly feels more like a fleeting swan song than the rally-to-arms which many may have hoped for.