Despite his diminutive stature, Roger (Aksel Hennie) is a corporate recruiter who seems to have it all. He dresses in the finest suits and lives with his stunningly beautiful wife Diana (Synnøve Macody Lund) in a plush, state-of-the-art apartment. He showers his wife with expensive gifts but can’t bring himself to give her the baby she craves. However, behind this successful facade his bank balance tells a different story, dangerously close to bankruptcy and with barely enough to cover the next payment on his palatial home.

To be able to afford such a life of luxury, Roger also dabbles in a little bit of fine art dealing; however, his approach is far from legal, involving numerous underhand techniques in order to steal original masterpieces and replace them with high quality replicas. Sadly not even this dalliance into crime is enough to maintain his financially overstretched lifestyle. 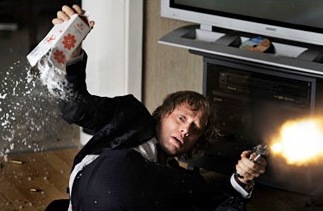 Then one fateful evening, at the official opening of his wife’s new gallery, Roger meets Clas Greve (Nikolaj Coster-Waldau), the ideal candidate for his new recruitment assignment who just so happens to be in possession of an exceedingly valuable Ruben, a painting previously considered lost. Roger sees this remarkable coincidence as the perfect opportunity to kill two birds with one stone, however, when he breaks into Clas’ home he discovers something that will change his life completely – and so beginning a lethal game of cat and mouse.

Headhunters combines various styles to tell its extremely ludicrous story. Whilst Headhunters’ moments of dark humour are amusing enough and the tension evoked from the film’s numerous twists is relatively engaging, the whole film, despite some assured aesthetic flare and accomplished performances, feels like a collection of scenes from various genre films neglectfully thrust together, resulting in somewhat of a cluttered piece which doesn’t quite seem to know what it wants to be.

Giving the audience full access to the escapades of its dislikeable anti-hero (an adulterous man obsessed with material wealth who only shows signs redemption after encountering numerous near death scenarios) Tyldum’s film fails to create an accessible emotional core to counteract the ridiculous set pieces which consume the majority of the film. The script relies heavily on a complete suspension of disbelief to be truly enjoyed – something that wouldn’t be such a concern if it wasn’t for the fact Headhunters takes itself so seriously.

Containing varying elements of heist movies, film noir, black comedy and suspense thriller, there’s certainly plenty for audiences to enjoy in Headhunters. Sadly though this incredibly unpredictable film is horrifically incoherent, chaotic and ultimately a throwaway piece of cinema which infuriates far more than it entertains.

American Express understands the power that film has to inspire, entertain and create lasting memories. Sponsorship of the Festival provides Cardmembers with exclusive access to a host of film premieres and cultural events through its award-winning Preferred Seating programme. For more information and to sign up to the newsletter, visit amex.co.uk/access.