Acclaimed director Michael Winterbottom is renowned for his ability to switch between genres with relative ease, with past successes including Jude (1996), 24 Hour Party People (2002) and The Killer Inside Me (2010). His latest venture is an adaptation of Thomas Hardy’s penultimate novel Tess of the d’Urbervilles set in present day India and stars Freida Pinto, Riz Ahmed and Roshan Seth.

Trishna (Pinto) is the eldest daughter of a rickshaw driver, living in an improvised part of India. Her life is changed dramatically when she crosses paths with Jay (Ahmed), the son of a wealthy hotel developer. Jay is taking his visiting British friends on a sightseeing trip around India, with their excursion leading them to a temple in a distant outpost town. It’s here that our two central protagonists meet, with Trishna dancing as part of a show in the hotel Jay’s friends are staying in.

Trishna’s striking beauty doesn’t go unnoticed and Jay becomes instantly transfixed with her. Going to great lengths to see her again, he orchestrates things so that she’s offered a job in one of his father’s hotels. Needless to say a romance soon begins to blossom, however, what initially looks like transpiring into a classic love story between a wealthy out-of-towner and a modest lower class girl soon takes a turn for the worse – leading to a series of uncomfortably degrading encounters.

Trishna is Winterbottom’s third Hardy adaptation (Jude and The Claim [2000]) and he’s clearly a director who understands the meaning behind Hardy’s literary works. Choosing India as a setting for this tale of conflict between traditionalism and romance allows the film to appear contemporary without losing any of the gravitas of the source material’s themes whilst simultaneously maintaining the book’s core narrative devices. 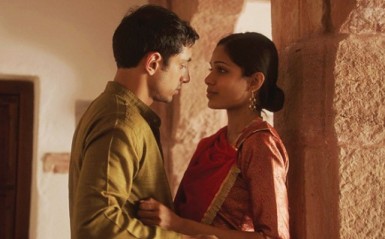 Obviously there have been concessions made and the story focuses solely on Jay and Trishna’s relationship to make sure the film never becomes overbearingly complex. Winterbottom has also amplified the Victorian book’s timid sexuality to bring it in line with our modern standing towards sex, visually encapsulating the stories powerful issues of virtue, identity and innocence.

Winterbottom’s simplistic approach to directing allows the scenery’s vivid colours to fill the screen and enhance the vibrancy of India’s often hectic towns and cities. This subdued approach culminates in the few sporadic moments of camera trickery resonating with great effect and allowing the film’s climatic final act to feel all the more dramatic.

Pinto is superb; however, the same can’t be said for the rest of the cast – who appear wooden and awkward within their roles; especially Ahmed, who is by far the weakest link. Trishna, much like Winterbottom’s previous film The Killer Inside Me, also contains an overbearing degree of misogyny that whilst clearly required to advance the plot (and in no way as physically violent as his previous work), creates a thoroughly uncomfortable viewing experience that removes the viewer from this harrowing tale.

Trishna is a beautifully-shot film that sadly fails to connect on the right emotional level. As modern literary adaptations go the film masterfully captures the essence of its source material, yet fails to effectively convey it in an engrossing fashion, with the film’s second half feeling far too illogical and out of sync with what goes before – resulting in a peculiarly dull tale of romance that lacks any substantial passion.