With such a broad and sweeping title, When China Met Africa (2010) is an ambitious project to undertake by sibling filmmakers Nick and Marc Francis, who wrote, produced and directed this venture. Attempting to investigate the implications of China’s expensive investment in Africa’s economy in exchange for its natural resources, the Francis brothers cleverly narrow their focus to one country and to three men seeking to gain from the partnership in different ways.

Mr. Liu is an opportunistic Chinese entrepreneur, who bought and developed a plot of land in northern Zambia, cultivated it into a farm and hired local Zambians to tend it. With the help of his family, he now owns and runs four farms and plans to buy a fifth. We also meet Mr Li, an engineering project manager under pressure to complete the country’s longest road intended to improve business commerce whilst battling with budget cuts and only 30% of investment needed from the Zambian government. Seeking Africa’s cut in this deal is Zambia’s Trade Minister, Felix Mutati, on the brink of securing Chinese investment as an alternative to decades of Western aid that never seemed to lift Africa’s economy off its knees, a need felt more fully in the midst of our global financial crisis. 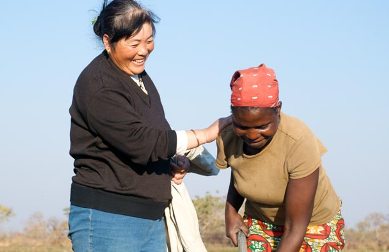 China has dubbed its partnership with Africa as ‘win-win’, a mutually beneficial relationship which promises rejuvenation in African economy in exchange for its rich natural resources, vital to China’s development. What’s interesting is the confident sell of the word ‘mutual’, the implication that all are on an even playing field. In theory, the arrangement is cynical but logical – China’s infiltration generates more jobs, more opportunity and more choices for the African people. However, what are the implications in the long run? Are they headed toward a brighter, independent future or an economic colonisation?

The Francis brothers don’t appear in When China Met Africa, and with only a brief background introduction and closing summary, their unobtrusive approach to filmmaking means the questions posed are raised entirely by the audience. However, they do not manage to remain entirely neutral, and their sympathies appear to lie with the Africans. No better is this reflected in their choice of their subjects. Zambian Trade Minister Mutati is affable, cheerful and passionately driven by a hope of a better future for his country, whereas Chinese farm-owner Liu comes across as very cut-throat and unreasonable, qualities reflected in his oh-so charming wife.

This subtle manipulation may compromise When China Met Africa’s integrity, but makes the topic far more compelling to watch, key in creating discussion and raising awareness. Despite choosing to focus their film on only a handful of people, the Francis brothers have succeeded in creating a surprisingly significant contribution on the topic of China’s striking momentum. Whilst it doesn’t have quite the same visual appeal of their directorial debut, Black Gold (2006), it’s an insightful view of cultural clashes and subtle exploitation hidden behind false laughter and apparently good intentions.