★★★★☆
A huge critical success upon its world premiere at this year’s Sundance Film Festival, winning the Special Jury Prize for lead actors Peter Mullan and Olivia Colman and the Directing Award, British actor Paddy Considine’s debut feature Tyrannosaur (2011) is an undeniably tough watch, but gentle moments of pathos and humour lift the film above the recent onslaught of gritty, northern dramas.
An actor and director in his own right, Mullan plays Joseph, an unemployed, alcoholic widower who appears trapped in an endless cycle of heavy drinking, intimidation and random acts of violence, all set against the backdrop of his Leeds estate. The film’s initial scene depicts Joseph kicking his own beloved dog to death in a drunken rage, perfectly encapsulating his mental state whilst also referring back to Considine’s early short Dogs Together (2007), which proved the basis for his debut feature. 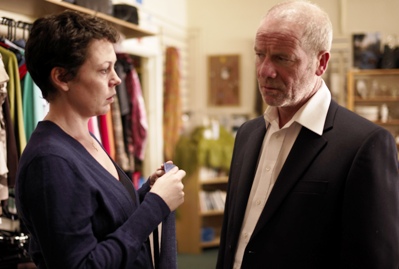 Salvation appears to come in the form of Hannah (Colman), a kindly Christian volunteer whom Joseph meets at a local charity shop. After a number of uneasy initial encounters, their relationship develops into a unorthodox friendship, but we soon discover that Hannah is hiding her own traumatic secrets relating to her repulsive, abusive husband James (a truly vile Eddie Marsan).

The influence of Considine’s lifelong friend and collaborator Shane Meadows is clear to see throughout Tyrannosaur, from the realist style and sparse, yet intense dialogue, to the film’s sporadic moments of brutal violence. However, it would be unfair to label Considine’s debut as purely derivative. His approach is perhaps less-informed by genre and more concerned with establishing a certain tone and atmosphere, with both his film and its audience benefiting immensely.