Under the sweltering heat of London’s unexpected Autumn sunshine, the red carpet unrolled in Leicester Square for the premiere of Johnny English Reborn (2011), the second installment of the action comedy that parodies the legendary James Bond and the secret agent genre at large. Played by Mr. Bean and Blackadder himself, Rowan Atkinson, Johnny English is an awkward British Intelligence Agent whose comical moves and crazy ideas regularly get him into disastrously hilarious situations while he is trying to solve the cases assigned to him.

In Johnny English Reborn, the sequel to the 2003 first instalment Johnny English, the titular secret agent has to stop a group of assassins from killing the Chinese premier. He sets off on his mission, incurring in the inevitable mishaps, misfortunes and misunderstandings along the way.

In attendance today with co-stars Gillian Anderson and The Hour’s Dominic West, Rowan Atkinson took the time to strike a set of very Bond-like poses next to a Rolls Royce specially created for the movie, before being greeted by the crowd of excited fans who’d been waiting in the heat to get a glimpse of their unlikely hero. 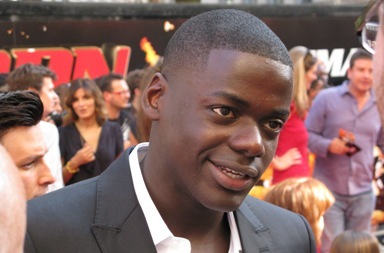 “It seemed like a good idea at the time” Atkinson jokingly replied when asked about his return as Johnny English. “We tried to make this film a little more sophisticated, we spent a bit more money on it, there’s more action, there’s more fun about it”. Regretfully, he said, he didn’t get to keep the specially-made car: “It will remain a Johnny English car in a very secret location somewhere”.

Also in attendance was director Oliver Parker, who gushed about working with Rowan Atkinson, describing him as “an extraordinary actor to direct, because he is extremely hard-working” and one who never holds back when it comes to finding new and better jokes. Talking about the challenges presented by the film, Parker stated “it was quite exciting to try and open it up as a more international espionage thriller, but also to create a world that Johnny can really explore a bit more, and in a way it felt like we had to move it somewhere else”.

Also excited about working with Atkinson and Parker was Gillian Anderson, who plays Pamela Thornton, “a very very serious agent who has been brought into the MI7 and is not very pleased with what Johnny English gets up to”. Gillian explained it wasn’t difficult to keep a straight face with funnyman Rowan Atkinson on set: “the character I play is not supposed to see the things Johnny gets up to, because if I did see him I wouldn’t send him out to save the world, and for many years I’ve played a character where I wasn’t allowed to see everything that was in front of my face”. In the future though, Anderson admitted that she’d like to tap into her comedic skills and play a “clumsy character who falls over”.

Johnny English Reborn is due for release in the UK on 7 October, 2011.