In its attempt to address the controversial subject of the world’s paranoia towards Islam, Mahsun Kirmizigül’s Five Minarets in New York (2010) somehow manages to hit all the wrong notes with its lack of subtlety and preachy tone.

Like so many post 9/11 films, which have set out to tackle the theme of Islam’s relationship with the rest of the world – in particular the US – Five Minarets in New York can’t help but place itself on an all-too-irritating pedestal.

Rather than allow the film to offer an element of socio-political commentary or to lay the foundations for such difficult issues to be discussed, director Kirmizigül appears to largely underestimate the intellect of his audience, with his brash exposition conveying a somewhat confused political message. This is primarily due to the ill thought out combination of mixing Kirmizigül’s unoriginal political ramblings with a series of generic and unnecessary Hollywood-style action sequences. 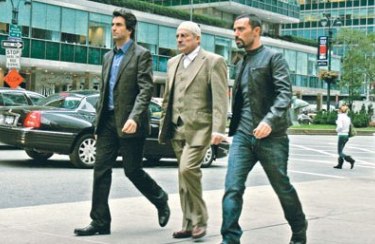 With the story focusing on two Turkish anti-terrorist cops – one of which is played by Kirmizigül himself – who are sent to New York City to apprehend a target suspected of leading a terrorist organisation, Five Minarets in New York fails to offer up anything approaching realism, with its cacophony of two dimensional characters and wholly unbelievable scenarios allowing little opportunity for its cast to breath any life into proceedings. This is particularly disappointing when considering that the talents of Robert Patrick, in the role of an Islam-hating FBI agent, and Danny Glover as an American Muslim leader have essentially been wasted.

It seems that when some directors are placed at the helm of a project regarding issues of terrorism and attitudes towards Islam, subtlety and story-telling are the first elements to be tossed aside in favour of condescension and pretension. Gavin Hood’s Rendition (2007) offered an equally nauseating take on the topic of the US’ ability to tackle terrorism, while somewhat surprisingly, one of the most successful movies to address these concerns appeared in the form of Chris Morris’ superb Four Lions (2010) displaying a far greater understanding of its subject matter through its ability to view the thematic concerns with a sense of humour, as opposed to the po-faced approached undertaken by so many.

Ultimately, Five Minarets in New York is unable to engage with the viewer in any way, finding itself stuck somewhere between political drama and run-of-the-mill action thriller in a manner that serves only to alienate its audience.