Canadian filmmakers Luc Côté and Patricio Henriquez have received numerous awards for Four Days Inside Guantánamo (2010), their truly shocking documentary from inside the Guantánamo facility following one young prisoner, Omar Ahmed Khadr, who is currently still being detained despite immense pressure from various sides to release him.

Four Days Inside Guantánamo is made up of declassified footage from Khadr’s cell, reacted to and commented on by family, cellmates, lawyers and military personnel, all of whom are absolutely horrified at the treatment this teenager receives.

The film is split into four sections, each representing a different stage in the interrogative process that Khadr endured. Despite the grainy quality of the footage, the changes in mood, body language and dialogue are very apparent, and make for uncomfortable viewing. The cell’s cameras capture four days of Khadr’s misery, whilst the interviews with those campaigning for his release help fill in the background as to how he got there and all he had already endured.

Omar Khadr was just fifteen when he was wounded and captured by the American army in Afghanistan, but instead of receiving medical treatment and a trial, was sent to Bagram airbase for ‘processing’ before being shipped off to Guantánamo for containment. 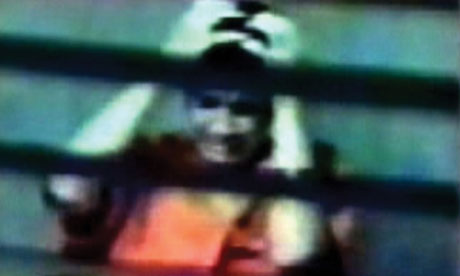 Khadr is introduced to a seemingly harmless interviewer from his native country of Canada, and at first expresses relief thinking that this man is here to represent the best wishes of his fellow countryman. But it doesn’t take long before the realisation sinks into Khadr that he is far from being rescued, resulting in the most heart-breaking scenes of raw despair.

The interrogator himself is passive-aggressive, petulant and cruel as he taunts his young victim with Subway sandwiches and control over the air conditioner – behaviour which, according to experts in the field, is considered psychological torture. It’s a truly hopeless situation for Khadr, who when asked to tell the truth shoots back with a frustrated, “You don’t like the truth”, reluctant to give them the false confession they want.

His family weep as they watch the footage of Khadr calling out for his mother, Maha Elsamnah, who is willing him to understand she didn’t know where he was, and is totally helpless to do anything now she does. Particularly revealing are the comments of Damien Corsetti – AKA ‘The King of Torture’ – an ex-US soldier based at Bagram who openly admits to administering torture on detainees. Corsetti struggles to comprehend the cruelty of the interrogator, observing, “Ultimately the blame now lies on the Canadian people, of how I, as a cold, callous son of a bitch, had more compassion for that boy than his own people?”

Four Days Inside Guantánamo is an absolutely striking example of the feverish hatred felt in America following 9/11, alongside the infamous celebrations captured when Saddam Hussein was arrested. Interviews with Khadr’s fellow Bagram prisoners reveal treatment in captivity that is so shocking it becomes hard to believe it would take place in the modern Western world, and highlights the damning effect anger has on rationalism.