Director Jim Sheridan, best known for the Academy Award-winning In the Name of the Father (1993), returns with Dream House (2011), a mystery-thriller starring Daniel Craig (returning in the role of 007 for Bond 23, Sam Mendes’ Skyfall [2012]), Rachel Weisz and Naomi Watts (next seen appearing alongside Leonardo DiCaprio in Clint Eastwood’s eagerly-awaited biopic J. Edgar [2011]).

Soon after buying an idyllic new house in the suburbs, a family discover that a brutal crime was committed within the premises. As the plot unfolds, it becomes apparent that the father of the house Will Atenton (Craig), may not be who he seems.

Anyone who has come across the film’s trailer will be aware of the rather obvious twist that occurs in the film. How then is Dream House – which claims to be a mystery – going to work if we all know the twist before viewing? Put simply, the first half of the film doesn’t work and the second half – whilst more entertaining – is by no means brilliant. Further contrived plot twists – which come thick and fast as we reach the film’s climax – fail to captivate and the entire project ends up being a poor mishmash of cliches and ill-developed ideas. 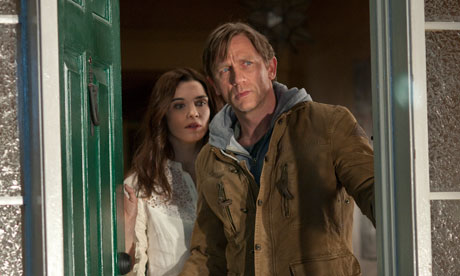 There are further problems with Dream House however, notably a terrible performance from Weisz whose very suspect American accent fails to convince. Real-life husband Craig’s performance fluctuates in overall quality but remains enjoyable enough, whilst Watts is unremarkable in every scene, leaving no lasting impression.

The overall failures of the film are probably best illustrated by its checkered production history. Sheridan himself has campaigned for the Directors Guild of America (DGA) to have his name removed from the project after a number of conflicts with the production company Morgan Creek Productions, who seized control during the editing process. Watching the film, one can sense that this was a production riddled with problems, most apparent in the extremely poor dialogue and script.

Dream House suffers from poor development, poor acting and a supposed central mystery that we’ve already anticipated. If you find yourself in the unfortunate position of being torn between seeing this film or getting your Christmas shopping done, go with the latter.