Baseball has always been a popular subject for Hollywood to tackle and the passion for the US national pastime usually equates to a multitude of bums on seats. During the 1980s there was a flood of big-hitting baseball films such as Field of Dreams (1989), Major League (1989) and John Sayles’ superb dramatisation of the 1919 Chicago White Sox scandal, Eight Men Out (1988) (probably the most interesting and cerebral baseball film of the decade). Bennett Miller’s Moneyball (2011) has all the brains and insight into the game as Eight Men Out and much more besides.

Scripted by Steven Zaillian (The Girl with the Dragon Tattoo [2011]) and Aaron Sorkin (The Social Network [2010]), Moneyball is the tale of Billy Beane (Brad Pitt), a former baseball prodigy who never lived up to his potential and eventually became the general manager of struggling major league team the Oakland As.

Unable to compete with the financial resources of the likes of the New York Yankees, Beane – along with Yale Economics graduate Peter Brand (Jonah Hill) – decide to create a team based on player statistics rather than their perceived worth. Of course everyone in baseball is convinced Beane’s idea won’t work, especially Oakland’s veteran team manger Art Howe (Philip Seymour Hoffman), who is unwilling to embrace Beane’s method. 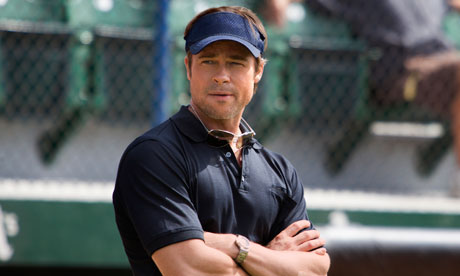 One of the problems with sports films is that unless you’re a fan of the game in question, you’re probably not aware of its history and much of the terminology will go over your head. Whilst some prior knowledge of baseball will enrich the experience of watching Moneyball, most of the action takes place off-field and concentrates on Beanes struggle against an archaic system. There is plenty for people who don’t know the difference between a fast ball and a curve ball fans to enjoy.

Pitt is perfectly cast as the laid back but passionate man with a plan. It’s his most grown-up and assured performance to date and he carries the film like a seasoned pro. The supporting cast of Hill and Hoffman both deliver, but such is the gravitas of Pitt that the two are forced to play second fiddle whenever they share the screen with him.

All in all, Moneyball is a fine addition to the baseball film canon. It’s not in any hurry to get anywhere and the climax doesn’t quite satisfy, but there is enough snappy dialogue and rousing moments to keep you enthralled.