As remakes go, Rod Lurie’s Straw Dogs (2011) manages to hold its own against Sam Peckinpah’s controversial 1971 classic of the same name, achieved through some innovative changes and strong performances from a cast that includes Alexander Skarsgård (best know for his role as Eric Northman in HBO’s True Blood, and more recently for his part in Lars von Trier’s Melancholia), Kate Bosworth and James Marsden.

Lurie keeps with the original plot, but has chosen to relocate the action to the sweltering heat of the American Deep South. LA screenwriter David Sumner (Marsden) has moved with his wife Amy (Bosworth) to her hometown in order to finish his latest script. Tensions arise in their marriage as they both come to realise that there is a growing conflict between themselves and the locals, who ultimately become a threat to both their lives.

Lurie’s Straw Dogs – like the original – is a visceral and psychological ride. The film’s grisly brutality is justified and shocking, particularly a close-up on a broken arm, bones and all. It is always a futile course of action to compare a remake to the original, but this being said, the choice of relocation to the Deep South – as opposed to an isolated, rural English village – is an appropriate one. This decision not only appeals to US audiences, but also allows elements of religion and nationalism to emerge as the justification for the locals’ anger towards outsiders. 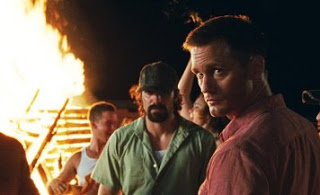 The overriding theme of Lurie’s remake is that when pushed to the edge we find out who we truly are. This is unlike Peckinpah’s idea that violence is innate; Lurie prefers to show that we are creatures controlled by our contexts. As well as being a thriller, Straw Dogs also ties into the western genre (we should remember the 1971 version was directed by one of the finest directors of westerns), with David and Amy finally holding out in the barn awaiting the cavalry – the twist of course being that there is no cavalry.

With a number of strong performances, particularly from Skarsgård and Bosworth – who smoulder with sexual aggression and tension – this is a thrilling and entertaining remake. Marsden’s performance – whilst solid – is let down by elements of his character. There are too many clichés to make him an outsider: he listens to classical music, is a writer, likes to play chess and has a penchant for classic Jags, not to mention that he’s the only man in the film to wear glasses. He is made so much of a blatant outsider, that you’ll find yourself irritated by his behaviour.

The ‘remake factor’ aside, with Straw Dogs Lurie has created an enjoyable but flawed film. Audiences who are unfamiliar with the original will certainly be entertained, but a word of warning – watch out for the bear trap scene.