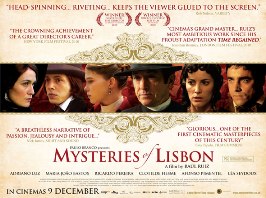 This August saw the sad death of prolific Chilean director Raoul Ruiz, whose last complete film Mysteries of Lisbon (2010) – based upon Camilo Castelo Branco’s classic novel – opens this week at selected cinemas. Set in the 19th century, this lavish costume drama is a collection of interweaving vignettes anchored around orphan Pedro da Silva, and as the plot unfolds each character’s past is unfolded with deft skill and precision, unveiling the truths shared between this diverse collection of peasants and nobles.

There is no denying that Ruiz has achieved a great feat of cinema with his final film. Utilising the contrasting landscapes of Portugal, Italy and Brazil as backdrops – and interior scenes of drawing rooms draped in gold and all manner of refinement – the painterly manner of the film is very pleasurable on the eye. One also can’t help but be impressed by the sheer effort it must have taken for Ruiz to engage with this amount of material Branco’s novel has thrown at him. The structure is impeccable and praise is due to Carlos Saboga (who has completed Ruiz’s actual last film, The Lines of Wellington, with Valeria Sarmiento) for the skill in evidence here. 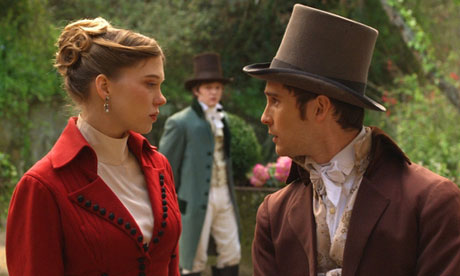 Yet as impressive as Mysteries of Lisbon is, there are also numerous problems. The first is the huge run time – 273 minutes is long by anyone’s standards, and according to distributors New Wave Films there is a 6 hour version being screened in France. There have been great films of equally epic lengths (Dances with Wolves ran to 224 minutes in the US and Branagh’s Hamlet to 242 minutes), but for a feature to be this long it needs a good reason for it. Unfortunately for Mysteries of Lisbon, there are just not enough reasons to justify the length.

Literary adaptations of classics are common fare in the world of cinema and TV – this year alone we have seen new adaptations of Wuthering Heights and Jane Eyre, and no doubt the BBC will be peppered with Dickensian-style period dramas over Christmas. What makes literary adaptations interesting is picking themes, characters and elements that suit the medium, as Tomas Alfredson’s Tinker Tailor Solider Spy did earlier this year. With Mysteries of Lisbon, Ruiz perhaps tried to handle too much material and however well he deals with it, Branco’s novel is an ill fit for the cinematic medium.

Ruiz achieved many great things in his career, making over a hundred films in his lifetime. Mysteries of Lisbon – whilst possessing many positive qualities – is by no means his magnum opus, yet with such an impressive catalogue of films to his name, there are plenty of others we may look back upon and enjoy remembering Ruiz for.