Whilst Romantics Anonymous is at first glance a pleasant and charming film, it lacks the gravitas to make it truly memorable. There are striking similarities between 2000’s Chocolat – starring Johnny Deep and Juliette Binoche – blended with the surreal charm of Jean-Pierre Jeunet’s 2001 French hit Amélie. This is followed with accompanying flourishes of movie references to both Audrey Hepburn and Julie Andrews’ performance as Maria in The Sound of Music (1965) as Angélique bursts into song. 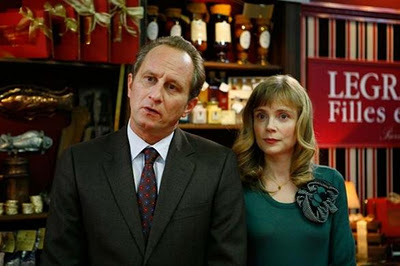 Whilst all this referentiality is fine per se, the film is weakened considerably by cliché and stereotype. Most irritating of all is that terrible plot contrivance of a hotel mistakenly booking only one room – this of course leading to the awkward moment of inevitable intimacy.

Both lead performances are convincing and successfully convey the problems faced by two people who live by the motto ‘Let’s hope nothing happens to us’, whilst simultaneously longing for companionship. The overall humour of the film is of a painful, yet amusing ilk; however after a while the quirks of the characters become tiresome.

What partially saves Romantics Anonymous are the lavish, almost 1920s-aesthetics incorporated into the present day (highly Parisian), with all the characters stylishly dressed in a way that only the French can achieve. The focus upon chocolate – a convenient thematic device that raises the concepts of temptation, repression and sex – adds an enticing bittersweet flavour to the contrast of neuroses and romance.

The concept of a romantic comedy tinted with melancholy works very well within the context of quirky French cinema, and just prevents Romantics Anonymous from being a clichéd mess.