Athina Rachel Tsangari – producer of Yorgos Lanthimos’ superb Dogtooth (2009) – directs Attenberg (2010) (named after British national institution David Attenborough), an ethological study into human sexuality and emotional alienation that is not nearly as austere and Haneke-esque as it sounds. Marina (Ariane Labed) is one of the few inhabitants of a near-abandoned mill town, the concrete pillar of her high rise emerging from the mountainous earth like an unnatural concrete spacecraft crashed into the mud. Her father (Vangelis Mourikis), one of the architects behind the town, is a single parent with terminal stomach cancer and her only friend the promiscuous Bella (Evangelia Randou). 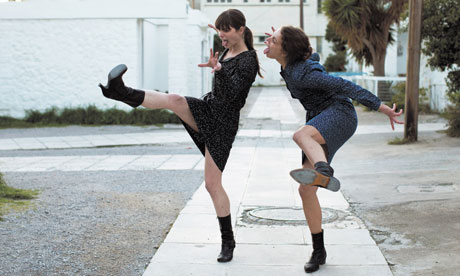 Marina, for reasons that are never directly explained, is emotionally and sexually stunted, first seen being given a practical lesson in kissing with her best friend. Her studious concentration is wonderfully performed wonderfully performed by Labed, who leads a note-perfect cast in striking a teetering balance between deadpan absurdity and nuanced character study. The title is a misnomer based on Marina’s obsession with the nature documentaries of David Attenborough, whose observational style is neatly applied to human relationships, Tsangari’s static camera lingering in doorways and corners and allowing even the most emotionally intense scenes to play in unforgiving wides. Often words will be repeated, the meaning slipping away.

Tsangari intersperses pivotal scenes with choreographed dance from her female leads, their routines acting as a Greek chorus, commenting on the unfolding of the narrative through wild gesticulation and animal cries. It’s hard to reduce Attenberg to a single theme or interpretation. It’s certainly a film that plays its cards very close for most of its running time – it touches upon the industrialisation of Greece, the nature of sexuality, the insubstantiality of language, its scope reaching from the rite-of-passage act of losing one’s virginity to issues surrounding the treatment of remains after death. For some the film may be too inscrutable, even obnoxious in its refusal to adhere to the principals of structure that audiences – on some level – expect. Those who give them over to the Attenberg’s controlled chaos will be rewarded by one of the most original films of 2011.