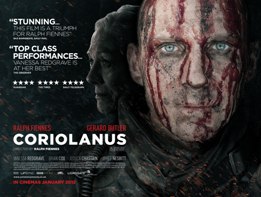 Coriolanus is of one of William Shakespeare’s most complex plays, making it a rather ambitious adaptation for Ralph Fiennes to choose as his directorial debut. Despite being one of Shakespeare’s lesser known tragedies, its tale of greed and power is certainly strong enough to build the foundations of any film. Starring Jessica Chastain, Vanessa Redgrave, Gerard Butler, Brian Cox and Fiennes himself (in no less than the starring role), Coriolanus (2011) boasts a cast more than capable of delivering the Bard’s multifaceted prose with the reverence it deserves.

Rome is creaking under the strain of civil dispute. At the heart of the discourse is Coriolanus (Fiennes), a once-respected soldier and war hero of the city, now little more than a patsy for corrupt politicians. Having had his public image destroyed in an attempt by Rome’s officials to manoeuvre the focus of the recent food shortage away from their inept rule, Coriolanus finds himself banished from the city. Blinded by anger and a carefully nurtured sense of pride, he joins his sworn enemy Aufidius (Butler) in a march to destroy the city he once defended so valiantly. 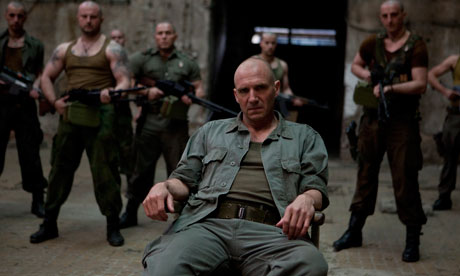 A film like Coriolanus lives and dies by its performances. Surprisingly, Butler – who many feared would do little more than bellow his lines in a gruff incomprehensible yell – stands out as one of the film’s few highlights. His restrained and thoughtful approach to the role showcases an ability to act that has so far been absent from the majority of his roles. Cox performs admirably with the limited screen time he’s given and has one of the film’s most emotionally crippling scenes, whilst Chastain continues to show just why she’s so rapidly become cinema’s ‘go-to’ actress for challenging female roles.

The most peculiar element of Fiennes’ directorial debut is his own role within the film. When behind the camera, the film displays a wondrous collage of beautifully captured shots, each masterfully framed and meticulously crafted. However, in the scenes where Fiennes finds himself caught under the harsh flickering eye of his own camera, the film buckles – without the restraining element of a director to guide him, Fiennes’ performance more often than not expels a tiresome melodramatic facade which dilutes the other noteworthy performances. Fiennes keeps his personification of Coriolanus very much grounded in the theatrical – sadly unable to draw the line between theatre and cinema – a bizarre issue as he’s clearly managed it in almost all other aspects of the film.

Coriolanus finds itself in a No-Man’s Land of Shakespearean adaptations – not so poorly conceived that it becomes an insult to its source material, yet nowhere near engaging enough to transcend itself above other familiar, contemporary interpretations. Fiennes clearly has what it takes to become a successful director – let’s just hope his next project sees him narrow his focus to working either solely in-front or behind the camera – not both.