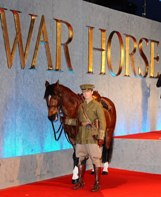 In a two-day extravaganza which included a dazzling UK premiere – attended by Royals Prince William and Kate Middleton – and a packed press conference, Steven Spielberg’s War Horse (2011) has finally been unleashed to British audiences. The film, which stars Tom Hiddleston, Sherlock actor Benedict Cumberbatch, Emily Watson, Peter Mullan and newcomer Jeremy Irvine as protagonist Albert Narracott, is based on the novel and stage show by Michael Morpurgo and was shot in Devon, with Spielberg describing it as his “first truly British film”.

War Horse tells the epic story of young foal Joey from his birth to the moment he is sold to the cavalry during World War I, and throughout his adventure to regain freedom and health. Joey is first trained by Albert (Irvine), a Devon boy who joins the army in a desperate bid to be reunited to his beloved horse during the pain and hardship of the Great War. 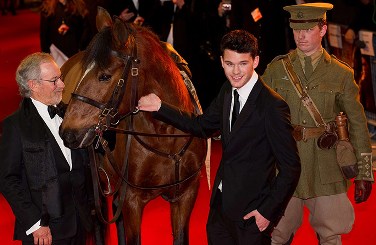 Spielberg joked about the fact that whilst watching the movie, viewers think the settings have been created digitally: but every scene was, in fact, shot on location, stating “The colours of the sky are all real. The sun goes down awfully fast in Devon!”. Just as real are the horses that played equine hero Joey: “Horses are extremely smart animals. They all had their trainers, their very own horse whisperers, and were trained to do specific things”, Spielberg continued. But what about the uncertainty of shooting with animals? The director said he cherished the ‘unexpected’ moments, because “You just can’t make a horse rub onto your shoulder like Joey does in the movie”.

Spielberg also spoke about choosing newcomer Jeremy Irvine as the lead actor: “I looked at hundreds of actors for [the role of ] Albert and nobody had the heart, the spirit or the communication skills that Jeremy had. He tested five times, and he just got better and better”. He added that he didn’t want the character of Albert to be the result of Irvine copying any other actor, and that he encouraged him just to “be himself”.

War Horse is a war story, and a love story, and one that, like Spielberg suggests, can be watched by all the family: “It was that way in the book, in the play, and that is what we tried to do in out adaptation”. The fact that we are able to see World War I through the eyes of a horse, and to follow his story through such difficult times, “conjures up very powerful emotions”, said producer Kathy Kennedy.

War Horse is released in UK cinemas this Friday. You can read our review here.