A story of corruption, deceit and exploring the true definition of justice, Pen-Ek Ratanaruang’s Headshot (2011) is a Thai film noir with an enticing twist – its central protagonist Tul (played by Jayanama Nopachoi) is a hitman, who after miraculously surviving a gunshot to the head, finds himself seeing everything upside down – literally.

When celebrated detective Tul refuses to take a bribe from a powerful politician he finds himself framed for murder – thrust into prison where despite his rigid belief in the law, he finds himself questioning the judicial system. Once released, this disillusioned ex-cop finds himself under the employ of Dr. Suang (Kiat Punpiputt), a secretive man who wishes to exploit Tul’s gift for gunplay – hiring him as an assassin to target the hordes of corrupt politicians and seedy business men of Bangkok.

However, whilst on a covert mission (disguised as a Buddhist monk) Tul sustains a near fatal head wound which leaves him in a coma for three months. On recovery he’s alarmed to discover his eyesight has been inverted, seeing everything upside down. This ocular disability gives him a new perspective on life, leading him to resign from his post and attempt to atone for his past – something rather more difficult than he first envisioned, with his decision resulting in him becoming a hunted man. 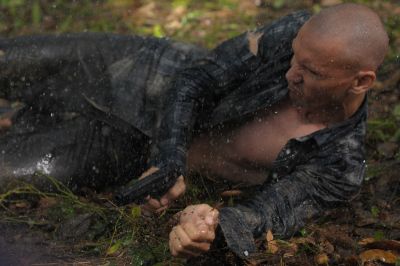 From its explosive intro, Headshot looks set to be a perfectly palatable hitman thriller, with a delightful ‘cat and mouse’ storyline full of twists and turns. Some sporadic moments of beautiful cinematography and playful camera work emphasise these initial assumptions, building the foundations for a gripping adventure for the film’s incredibly watch leading man – with Nopachoi a perfect choice for this gritty, yet physically demanding role.

Sadly, despite its enthralling first act,  Headshot runs out of gas pretty quick, becoming bogged down in its cluttered and clumsy script. Attempts to readdress the karmic balance in Tul’s search for redemption are sloppily handled, with the film often unsure as to what it wants to be – sometimes an existential thriller at others a socially aware tale of morality, but all the time a confused and messy amalgamation of ideas.

Headshot’s most heinous flaw comes from its utterly redundant decision to make its protagonist suffer from a visual impairment. It would have been awful if this gimmick had been over used, but ignoring it almost entirely it far worse – a needlessly implemented narrative tool that promises to ignite this formulaic action film into a unique viewing experience, that ultimately results in an inexcusably disappointing addition.

Headshot should be commended for its attempts to transcend the formulaic trappings of its genre – yet sadly in doing so director Ratanaruang has over-burdened his script, culminating in a clumsy action thriller which despite its frantic opening act, quickly descends into an incoherent mess.