Filmed with 20 cameras at a headline show at Japan’s wildly popular Fujirock Festival, long-term visuals collaborator and director Adam Smith’s Don’t Think (2011) is a full-length concert movie that attempts to fully capture the audiovisual spectacle of a live show courtesy of Manchester electronic duo The Chemical Brothers. However, whilst undeniably a feast for the eyes, the film struggles to transcend its superficial premise and may prove inaccessible for those not acquainted with the work of Tom Rowlands and Ed Simons.

A useful comparison piece in understanding both Don’t Think’s successes and failures would be Douglas Gordon and Philippe Parreno’s supremely-crafted Zidane: A 21st Century Portrait (2006). Both films focus upon popular figureheads within their specialist field, taking a deeply visual approach in order to flesh out their subjects. However, despite the best efforts of Smith, Rowlands and Simons, the Brothers’ live show is what it is – a musical performance. 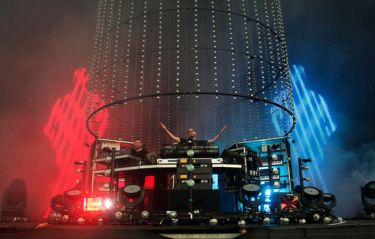 In between capturing the extraordinary light displays, the numerous cameras flit around the vast Japanese crowd, resting occasionally with one of several recurring individuals (the actual veracity of whether they are unsuspecting bystanders is debatable). Yet aside from the occasional wide-eyed “ooh” or elated scream, we gain no universal truth other than everyone seems to be having a ball.

In contrast, Zidane: A 21st Century Portrait, whilst on the surface a logistical exercise in following a world class footballer for the full 90 minutes of a Real Madrid match, delved into the iconic French-Algerian’s enduring legacy through a series of hypnotic cutaways to fans and admirers across the world – a true testament to an individual that transcended his globally-renowned craft. Don’t Think functions as a fine showcase for the musical prowess and showmanship of the Chemical Brothers, yet lacks the heat, sweat and heart-pounding, universal intensity of the live festival experience.

Don’t Think is released in selected UK cinemas for one night only on Friday 3 February. For more info, visit dontthinkmovie.com.