DVD Review: ‘Dreams of a Life’

The death of Joyce Vincent came under great media scutiny in 2003. Her skeleton, identified dentally by a picture of her smiling, was found decomposed after three years of lying unnoticed in her North London flat. This much we know, but with 2011’s Dreams of a Life, filmmaker Carol Morley set out to explore the identity of this mysterious individual who, apparently lively and popular, suffered a great loss of confidence in the years leading up to her lonely death.

A series of people who knew Joyce were tracked down to paint their picture of the woman they’d encountered. Some of them seem genuine, whilst others are a bit sketchy and unsure of their opinions on Joyce. Overall, their reaction to her death is casual surprise and what follows is an indulgent delve into Vincent’s past, including a look at her dreams and a constant reminder that she was beautiful and sexy; as if not being sexy makes a death less ironic.

Morley seems more concerned with orchestrating a messy illustration of Joyce’s hapless dreams of being a soul diva, and 99% of the dramatic content is actor Zawe Ashton (of Channel 4’s Fresh Meat fame) sashaying in front of a mirror alone in her bedroom with a fake microphone. One particular take of Joyce’s lonely karaoke really drags – and its purpose just isn’t crystal clear. 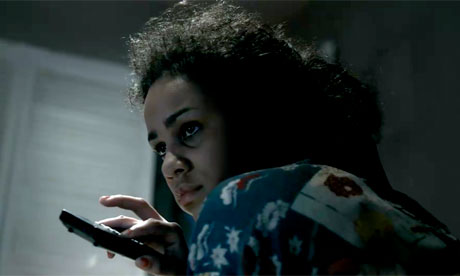 Dreams of a Life’s narration is littered with contradictions, and again this might have full reasoning; possibly to portray our sad subject as confused and drowned in identity issues. Some of the subjects talk about Joyce’s great ambition and vision for her bright future, while others insist she was lazy, unproductive and assured of dim days ahead. One ex-boyfriend in particular seems dead set on crushing her undefendable dignity, making her even more powerless and pitiable than, in death, she already is.

To this end, it’s slightly confusing as to what Morley strove to achieve with the making of this film. Though it’s an undeniably intriguing story from the offset, like a strange obscure docudrama, no resolution is achieved – and yet this happily exploits the privacy of a woman we are told liked to keep her life under wraps. If some helpful or productive truth shedding light on her mysterious demise radiated from this film, it would serve a worthy cause in Joyce’s name – but like every tabloid story concerning death, it is shrouded in sensationalism that need not be present.

Dreams of a Life received critical acclaim during its winter release, perhaps due to its strikingly contrasting content next to the blockbusters and Christmas classics being screened. Laudably, Morley claims one of her reasons for making the film was to celebrate the brighter moments in Joyce’s life, but the macabre public still associate her with her shocking and terrible death: something that is, of course, staged before the reel stops.