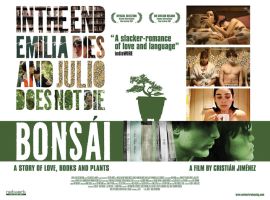 Bonsái (2011), Chilean director and writer Cristián Jiménez‘s follow up to 2009’s Optical Illusions realises the tale of a handsome and philosophical literary student, first love and fact vs. fiction. his latest effort still bears some of the postmodern leanings of his debut, but this precise and beautifully photographed (by cinematographer Inti Briones) adaptation of Alejandro Zambra’s celebrated novella looks more wryly at the close bond between young lovers, saving face and creating alternate truths.

Julio (Diego Noguera) is at university lying along with the rest of his class about reading Proust’s ‘Rememberings of the Past’ when he falls in love with the quiet, pretty, rock-T-shirt-wearing Emilia (Natalia Galgani). The two embark on an unabated love affair that lasts through college and features fairly gratuitous nudity to paint a picture of their intimacy. Each night they read just one page of high literature to one another before falling asleep. 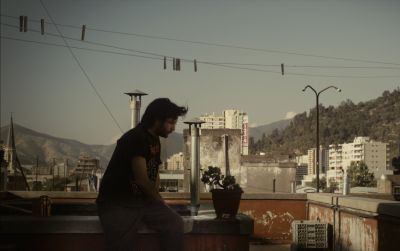 Eight years on and their love affair in the past, Julio is hired by a world-famous author to help write his next novel. After losing the job before it begins, Julio pretends he is still helping with the manuscript when asked about it by his admiring neighbour and lover, Blanca (Trinidad Gonzalez), with whom he shares a lacklustre sexual relationship. Julio, a deflated and lost soul, delves into his memory bank of more alive days spent with Emilia, laying the foundations for the book he has to write to keep up the lie.

Bonsái’s quiet comedy is carried by the easy lies and naive mistakes made by the youngsters; he buys Emilia a bonsai tree as a loving gift and her deadpan best friend (Gabriela Arancibia) informs them of its symbolism of short shelf-life, unsettling Emilia who after a few years abruptly breaks up with Julio and who, as we are told in the opening lines of the film, will die at the end. The aesthetic of a bonsai becomes more defined later in the film, when Julio takes the pot plant and nurtures it in all its precise and miniature form.

The paired narratives are interestingly carved out – they segment themselves into chapters such as ‘Blood’ ‘Bulk’ ‘Leftovers’, and detail our protagonist’s passionate but lazy nature with ease. Books and sex are the mutual themes there, Julio is a pleasant, demure character whose explorations and discoveries are funny and compelling to observe. Bonsái is a sterling film that contributes to Jiménez‘s increasingly experimental and honest body of work that takes human emotions and dissects them quite skillfully, without pretension or woe.