Generally speaking, dancing’s depiction in films and the media has tended to be aimed towards the older generation. Then shows like Strictly Come Dancing and Britain’s Got Talent came along and suddenly it was hip, no matter what your age, to strut your stuff. It’s the audiences of those shows that StreetDance 2 (2012), starring Falk Hentschel, Tom Conti and George Sampson and directed by Max Giwa and Dania Pasquini, is clearly hoping to attract – an aim it should have no problem in accomplishing.

After suffering humiliation at the hands of a rival crew street dancer Ash (Hentschel), with the help of his friend Eddie (Sampson), gathers a mixed bag of kids from around the world who all have one thing in common – they can dance. Together they head for New York City where Ash intends to get his revenge by taking a shot at the ultimate dance-off. 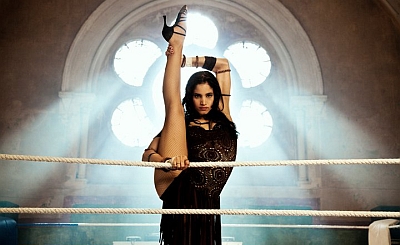 Since Fred Astaire and Ginger Rogers’ glory days, the draw of people dancing on the silver screen has been irresistible. Now it’s also big business. But, though the plotting of RKO classics like Top Hat (1935) were just as shallow, they have survived due in main to a flair often lacking in many of their modern counterparts.

This missing element however is present in StreetDance 2 in abundance, and may just be what saves it. Obviously youth culture and street dancing are pivotal to the story, the film as a whole having a degree of grittiness. However this is softened by the unexpected placing of the action within the softer environs of Paris instead of London or New York as you might expect. Tom Conti – as the group’s older mentor Manu – who owns the club where they practice, also has a restraining influence on not only the kids themselves, but the possible excesses of the film as a whole.

For the older viewer the camaraderie of the team as they pull together and join forces against the rival gang of dancers, has the nostalgia of such kids TV shows as the 70s classic The Double Deckers, where the apparently less competent and weaker group always managed to find an inner strength when needed most.

Though unlikely to appeal to lovers of old style Hollywood, younger viewers will likely find StreetDance 2 much like an extension of their favourite Saturday night shows, and as such largely entertaining.