The story of 70-year-old Dane Sigrídur Nielsdóttir is not one of triumph against adversity, nor one of international significance. It is, however, a very sweet and surprisingly moving tale, as revealed in the Icelandic documentary film Grandma Lo-fi: The Basement Tapes of Sigrídur Níelsdóttir (2011), directed by the triumvirate of Ingibjörg Birgisdóttir, Orri Jonsson and Kristín Björk Kristjánsdóttir.

Born in Denmark, but having spent most of her adult life in Iceland, Nielsdóttir began writing and recording music when her children bought her a cassette recorder for her 70th birthday. Over the course of the next seven years, she ‘released’ nearly sixty albums (with around 680 songs), becoming something of a cult star in both her native Denmark and her adopted Iceland. 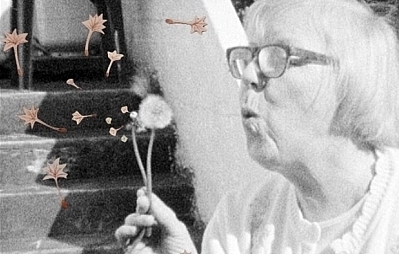 Grandma Lo-fi does not linger on Nielsdóttir’s life story, nor spend much time on the music itself. Instead, the focus is largely on the titular subject, who appears delighted to share her secrets about how she achieves certain sound effects for songs. She shows the filmmakers how she simulated the sound of a waterfall by arranging a series of jugs to overflow into each other. She also describes how music led her to discover a new way for her to understand her religion.

The film’s talking heads, largely drawn from the Scandinavian alternative music scene, including members of múm and various solo artists, deliver anecdotes on Nielsdóttir’s life and career. These usually take the form of short songs, set to the woman’s own music and either sung or delivered as spoken word, performed in front of a series of bizarre backdrops which – it later emerges – are all pieces of collage made by Nielsdóttir.

At this year’s Flatpack Festival, Grandma Lo-fi was accompanied by Jim Turner’s short documentary George Shaw: I Woz Ere (2011), showcasing the Coventry-born Turner Prize-nominee. Shaw has made a seemingly unlikely career as an artist from his paintings of Tile Hill, the area of Coventry where he grew up, and Turner documents Shaw’s preparations for a homecoming exhibition in Coventry city centre. The film relies rather heavily on the alternative rock hits of the 1980s – Joy Division and The Smiths both pop up at moments that aren’t entirely appropriate – but as George Shaw: I Woz Ere ends on the artist making yet another wry, funny observation about his success, This Charming Man seemed an apt description.

For more info on the Flatpack Festival, visit flatpackfestival.org.