Martin Scorsese’s 3D debut Hugo (2011) arrives on DVD and Blu-Ray this week after a hugely successful awards season, picking up five Oscars at the Academy Awards along with numerous other nominations. Despite accusations to the contrary, the film is undeniably Scorsese’s, as intrinsically conjoined to Marty the filmmaker as Marty the film preservationist. Just as the titular lead character Hugo (Asa Butterfield) maintains the clocks in the Parisian train station where he resides, Scorsese has taken it upon himself to preserve the classics of silent cinema, specifically those belonging to the masterful Georges Méliès.

Based on Brian Selznick’s New York Times bestseller The Invention of Hugo Cabret, Scorsese throws his audience into a magical-realist presentation of a wintry 1930s Paris, complete with glittering Eiffel Tower (naturally), smoke-billowing rooftops and pixel-perfect architecture. After a mesmerising long shot taking us from the snow-filled skies into a train station’s clock tower, we are introduced to our plucky protagonist Hugo Cabret. 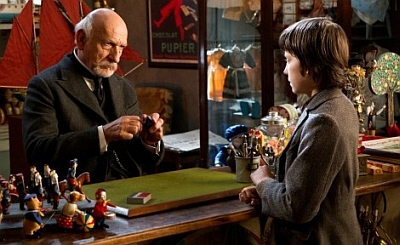 After the untimely death of his loving, somewhat eccentric father (Jude Law), Hugo is taken in as an apprentice to his alcoholic Uncle Claude (Ray Winstone), helping the drunkard to maintain and repair the station’s many ornate clocks. Swiftly left on his own to fend for himself, Hugo is given the run of his new, unorthodox home where he meets disgruntled toy shop owner Georges (Ben Kingsley) who – Hugo soon discovers – may be more than he initially appears.

Hugo is, undeniably, a film of two halves – with a fairly uneven split. Whilst Moretz’s Isabelle (Georges’ amiable goddaughter) continues to be even more progressively charming, Butterfield’s Hugo is rather bland and hard for the audience to emotionally attach themselves with. Yet Scorsese obviously retains (and wants to encourage others to adopt) a great fondness for the sheer genius, ingenuity and imagination of Méliès, and whilst the film often falls into the trap of becoming too much of a conventional children’s film, for the purpose of encouraging children to investigate the true wonders of silent cinema, any drawbacks can easily be forgiven.

The most remarkable of the film’s scenes are undoubtedly the reconstructions of Méliès’ shoots. The opportunity to revisit the skill and talent that went into such supposedly ‘primitive’ methods of filmmaking – which still remains the foundation of our celluloid dreams – delivered by the oft-regarded best living American director, is reason enough to warrant Hugo’s existence.