Many Bruce Campbell aficionados will have overlooked William Lustig’s action slasher Maniac Cop (1988). Panned upon release, it took a swan-dive at the US box office yet garnered enough popularity in the video rental market to spawn two sequels: Maniac Cop 2 (1990) and Maniac Cop III: Badge of Silence (1993).

Campbell stars as beat cop Jack Forrest, a clean-cut boy scout who finds himself accused of a spate of murders after his unhinged wife Ellen (Victoria Catlin) winds up dead. The killer in question is posing as a member of the New York constabulary, and it’s up to homicide detective Frank McCrae (Tom Atkins) to hunt him down before he puts another body on the mortuary slab. 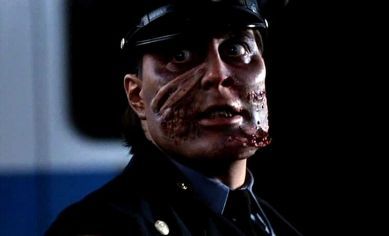 Larry Cohen’s script is as tight as a snare drum and although there are lashings of the old ultra-violence, the film never takes itself too seriously – this undeniably diminishes the horror aspect, but makes for a more entertaining experience. The maniac cop himself is a mixture of the Terminator and Friday the 13th’s Jason Voorhees, and although tales of unstoppable killers are ten-a-penny, the film’s central antagonist does feel like a fresh take on an old idea. The main players all do their duty, but it’s John Carpenter regular Atkins’ grizzled gumshoe and Robert Z’Dar (the man with the large jaw from 1989’s Tango & Cash) who stand out from the crowd.

Many of the negative Maniac Cop reviews have harped on about the film’s genre-splicing sensibilities, claiming that Lustig’s effort is not scary enough to bare the official horror movie mark of authenticity. Whilst it’s certainly low on frights, there is still more than enough gore here to keep your average blood-thirsty viewer satisfied.

Maniac Cop deserves to be re-evaluated as a quintessential 80s B-movie – low on brains but high on charm – and lucky viewers should keep an eye out for cameos from The Evil Dead (1981) director Sam Raimi and the Raging Bull himself, Mr. Jake LaMotta.