With his latest film This Must Be the Place (2011), Italian director Paolo Sorrentino delivers many of his trademark features: scenes of baroque excess, playfully swooping cameras, the pounding energy of rock and roll, and the presence of death in life. His four Italian feature films, gathered together in this Artificial Eye box set, are testament to the director’s innovation and crisp, contemporary style.

Watching his trajectory from the hit-and-miss debut One Man Up (2001) to his celebrated political biopic Il Divo (2008), one thing remains constant amongst the mish-mash of styles and genres – the presence of one man, alone and impenetrable to the world. In The Consequences of Love (2004), the lone man is Titta di Girolamo (Sorrentino muse Toni Servillo), an ashen-faced and secretive ‘businessman’ who has frequented the same Swiss hotel for eight years. His secret life reveals a habit much more dangerous – a weekly dose of heroin, used to mask his broken family background and past criminal life. In The Family Friend (2006), the hapless loner is Geremia (Giacomo Rizzo), who abuses the inhabitants of the small town he lives in for interest on their loans, until he becomes involved in a Mafia million euro scam. 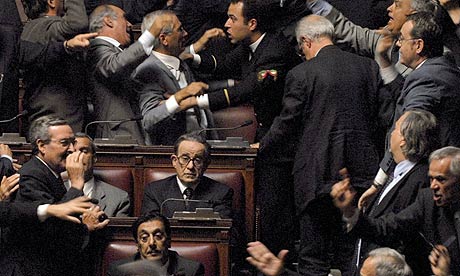 Tony Servillo plays a similarly impenetrable character in Il Divo (2008), which won the Jury Prize at Cannes in 2008. Servillo powerfully brings to life Italy’s controversial but publicly low-key, seven-time Prime Minister Giulio Andreotti. The film is often hard to follow, and alternates between the frenetic and the slow – characters are quickly introduced, only to be killed off, and those who know a risotto grain about Italian politics will likely find events hard to follow. Yet the film is shot so beautifully that one can be forgiven for just sitting back and enjoying the view.

The irony of the film’s end credits is palpable, as they inform us that in 1999 Andreotti was acquitted of mafia association because of lack of incriminating evidence. This information tumbles along to German synth pop band Trio’s silly one hit wonder ‘Da Da Da’. This particular pop culture reference stands out to perfection. Though somewhat lacking in the visual and narrative cohesion of The Consequences of Love, Il Divo presents Italian political life in the 1970s and 80s as a glamorous labyrinthine maze of intrigue, murder and mafia association.

Beautiful, imposing interiors threaten to dwarf Sorrentino’s protagonists. Captured by the talented cinematographer Luca Bigazzi, Sorrentino’s hotels or apartments are temples of style and alienation. In The Consequences of Love, it is the lifeless elegance of a stylish Swiss hotel; in Il Divo, Andreotti finds himself shrouded by expensive baroque rooms, imposing chandeliers and chiaroscuro lighting. In One Man Up, Servillo plays nightclub crooner Tony Pisapia, a man embroiled in a sex scandal that wipes out his career, and Andrea Renzi plays injured footballer Antonio. Both fall from grace through the perils of fame – one through cocaine addiction, the other through injury. Like Sorrentino’s other films, One Man Up charts the sublimation of the self of a fallen male protagonist.

Justly celebrated as one of the most brave and innovative film-makers at work in Italy today, Sorrentino doesn’t shy away from uncovering the violence and intrigue of political or mafia life. This makes him the perfect director for the television series based on the film (and book) Gomorrah (2008). This box set shines a light on the work of Italy’s taboo-busting director.