You’d be hard-pushed to find a more heart-warming documentary this year than Constance Marks’ Being Elmo: A Puppeteer’s Journey (2011), which charts the rise of devoted Elmo handler Kevin Clash from his humble beginnings in Baltimore to his tragically short working relationship and friendship with the late, great Jim Henson. What shines through is Clash’s dedication to the worthy cause of puppetry, despite its detrimental effect on the relationship between himself and his maturing daughter.

As a teenager growing up in Baltimore in the 1970s, Clash had one very clear goal – he wanted to have a career as a world-class puppeteer. More specifically, Clash dreamt of being part of Jim Henson’s team, the creative force responsible for delivering the magic of Sesame Street and The Muppet Show to the young boy on a daily basis. With a supportive family behind him and thanks to a spot of good luck, Clash managed to achieve his goal, leading to his own personal discovery of every child’s favourite third-person-self-referencing, little red monster Elmo. 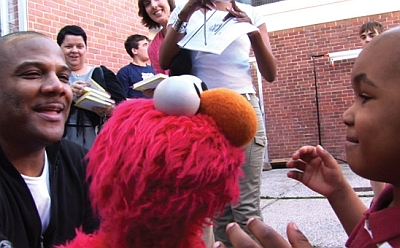 Narrated by Whoopi Goldberg and including interviews with Frank Oz, Rosie O’Donnell, Cheryl Henson, Joan Ganz Cooney and others, this insightful and personal documentary offers up a rare, behind-the-scenes look at Sesame Street and the Jim Henson Workshop. For the rare few that felt slightly short-changed by the vaguely cynical The Muppets (2011), Being Elmo is the perfect antidote; a warm, engaging tale of one man’s childlike imagination and drive to succeed.

There isn’t a great deal beneath the films fuzzy fleece exterior, and the few cracks that arise during Clash’s rise to fame are swiftly covered with the expert precision of one of Henson’s own seamless stitches. We get the distinct feeling that Clash’s puppet obsession effectively ended his first marriage, yet Marks’ film clearly isn’t willing to delve that deep into the personal life of its markedly reserved star. Much like the cuddly character of Elmo, this documentary celebrates the joys of life, rather than concentrating on its harsh, often unpalatable truths – minus perhaps Henson’s tragic, untimely demise in 1990.

The real joy of Being Elmo lies in Clash’s own meticulous approach to puppetry, most evident in a number of scenes where he instructs the puppet cast of the newly-launched French Sesame Street. One cast member dreams of having Clash somehow telepathically ‘control’ her arm, frustrated by the difficulty she is having attributing naturalistic movements to her lifeless character. Yet Clash never loses patience, showing the very dedication that brought him from Baltimore to the top of his industry in New York City.

Whilst there is bound to be a heavy dose of nostalgia factor attached to any film that deals with childhood characters, there’s enough back-story here to suggest that most will be engaged by Being Elmo, regardless of their feelings towards Elmo or puppetry as a whole – the cinematic equivalent of a big, fuzzy hug.