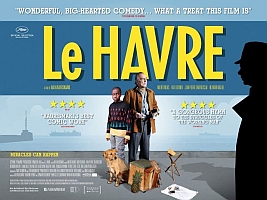 It’s been six years since the last cinematic release from Finnish director Aki Kaurismäki (2006’s Lights in the Dusk), and he couldn’t have picked a much better return project than the wonderfully stylish comic drama Le Havre (2011). If Michel Hazanavicius’ The Artist (2011) was a part-homage to Hollywood’s silent age, Kaurismäki’s latest functions perfectly as a loving ode to the French cinema of the 1950s and 60s.

André Wilms plays the amiable Marcel Marx, a former artist and Parisian Bohemian who has since retreated to the port city of Le Havre to live out a humble existence as a shoe shiner with his wife Arletty (Kati Outinen) and loyal canine companion Laïka. After Mrs. Marx is admitted to hospital with a serious medical condition, Marx suddenly loses his zest for life, disenchanted by society and its ever-restrictive rules and regulations that have kept Marcel on the borders of poverty. Thankfully, redemption comes in the form of young African immigrant Idrissa (Blondin Miguel), on the run from the port authorities after he and his grandfather are discovered hiding out in a London-bound shipping container. 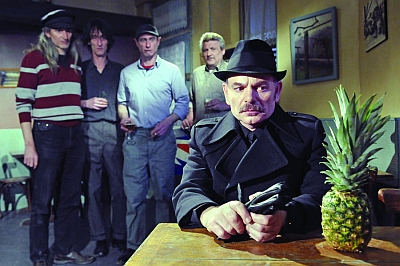 Following a chance encounter with Idrissa as he takes his lunch, Marcel steps up as his personal guardian angel, hiding him in his modest home whilst attempting to raise the funds to get the boy across the channel to his estranged mother. However, as the port authorities and bloodhound-like Inspector Monet (Jean-Pierre Darroussin) close in, Marcel is torn between caring for his deteriorating wife and saving Idrissa from a future in one of France’s immigrant internment camps.

Indebted to the primary colour drenched films of Jacques Demy (1964’s The Umbrellas of Cherbourg seems an obvious reference point in terms of visuals) and the simple, microcosmic tales of Yasujirō Ozu, Kaurismäki’s Le Havre is a lovingly-crafted morality piece, peppered with some wonderfully deadpan comic moments (whilst on the search for Idrissa’s incarcerated grandfather, Marcel introduces himself as a close relative – when questioned about his differing skin colour, he drolly replies, “I’m the family albino”).

Pivotal to the film’s success is undeniably Wilms, who excels in the role of heroic working man Marcel. Depicted as a pillar of the local community, our kind-hearted protagonist is able to call upon the assistance of his close friends (from shopkeepers to fellow shoe shiners) to help aid Idrissa’s escape to freedom. Also hugely impressive is Darroussin – his supremely understated turn as diligent dogsbody Monet could be aptly described as part-Clousea, part-Poirot, seemingly always one step behind in his pursuit of Idrissa, yet with a style of questioning that suggests he may well be keeping his cards close to his chest.

For dedicated Francophiles, Kaurismäki’s Le Havre is simply unmissable, a cine-literate treat that’s somehow simultaneously archaic and contemporary. For those looking for an accessible introduction to Kaurismäki’s vibrant oeuvre, the time is now.