First-time writers and directors Tom Kingsley and Will Sharpe unite to make the bold and darkly funny Black Pond (2011), an inherently British drama about a family who are accused of the murder of a stranger. By mixing elements of comedy, surrealism and, believe it or not, mockumentary, they’ve created a truly twisted, yet brilliantly unique debut – one that utilises every penny of its meagre £25,000 budget.

While walking his dog in the nearby woods, Tom Thompson (Chris Langham) stumbles upon Blake (Colin Hurley), a hapless man who catches his attention enough to warrant an invitation for tea. Back at the house, Blake meets Tom’s uneasy wife Sophie (Amanda Hadingue) and ends up spending the time. When Blake returns from a walk the next day with news that their dog has died, Tom hurriedly pulls together the family, including Blake, for a funeral. But, when Blake dies in their company, things take a turn for the worse. 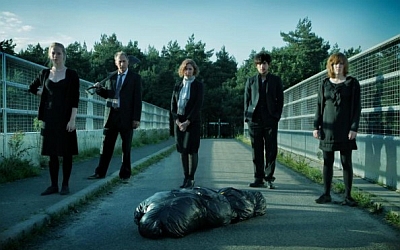 Black Pond details the events leading up to Blake’s death through talking-head interviews with the family and a reversed narrative unspooled through Tim’s dealings with a shady psychiatrist, thereby explaining the police’s involvement. It’s an off-kilter approach that not only compliments the Thompson’s peculiar story perfectly, but also allows for the narrative to be fed out through short, sharp, restrained bursts of information in such a tantalising way that ensures the audience are left wanting more.

Even though they never favour style over substance, the various techniques Kingsley and Sharpe employ in Black Pond help to strike the perfect balance between the many influences on show, all the while according the distinct story in an uneasy sense of reality. As the matter shifts from mockumentary to drama to comedy, the understanding Kingsley and Sharpe display for the technicalities never falters, with the newspaper clippings and talking-head interviews that fall intermittently adding an extra element to film already brimming with distinguishing features.

It’s the performances from the entire cast that contribute a real edge to Black Pond’s essence. Each of the actors deliver their lines with an impassiveness that suggests their could be far more to each than initially meets the eye. Langham and Hurley are the two stand-outs here, though, as they play out each other with haste and talent that makes you wonder why they’ve never had much screen time, though Langham’s recent incarceration may have been part of the reason.

Black Pond is a piece of filmmaking that oozes originality and brings together a team of writers, directors and actors who are every bit as integral to the stories accomplishment as the last. Kingsley and Sharpe have positioned themselves very well indeed and it’ll be both exciting and apprehensive to see how, and if, they can match this wonder.