The newly-released Deadball (2011) and Yakuza Weapon (2011), the twin gorefests from directors Yûdai Yamaguchi and Tak Sakaguchi, starring Tak Sakaguchi, Mari Hoshino and Jun Murakami, jettison any semblance of taste to the point you question whether it existed at all. Deadball follows Jubeh (Sakaguchi) who, after accidentally killing his father whilst practising baseball as a child, swears never to play the game again. Several years later Jubeh is sent to the Pterodactyl Juvenile Reformatory after perpetrating a killing spree of epic proportions.

The facility’s warden Ishihara (Miho Ninagawa) who is obsessed with baseball forces Jubeh to join the facility’s team, which he reluctantly does providing the team members are pardoned for their crimes. The team’s next game, against the notorious St. Black Dahlia High School team (composed of young, psychotic female butchers), is predictably nasty. 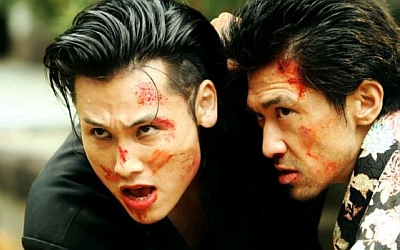 In Yakuza Weapon, Shozo (Sakaguchi again) is devastated by the assassination of his crime boss father Kenzo (Akaji Maro). Discovering the man responsible for the murder is Kurawaki (Shingo Tsurumi), once his father’s second-in-command, Shozo sets out for revenge. Losing an arm and leg in a confrontation with Kurawaki, Shozo is fitted with heavy duty artillery in place of his missing limbs (with echoes of the Planet Terror segment from 2007’s Grindhouse double-bill). Meanwhile Kurawaki who has also survived changes Shozo’s best friend Tetsuo (Jun Murakami) into a drugged-out killer with orders to kill Shozo on sight.

On reflection, it doesn’t take much of an expert to recognise cinema devoid of redeeming qualities. Visceral violence, if not palatable, is tolerable if relevant to plot-line or done with realism and integrity. Yet Yamaguchi and Sakaguchi clearly do not see themselves as being bound by such normal conventions, as Deadball and Yakuza Weapon are simply prolonged exercises in grossness and bad taste.

An early scene in Deadball sums-up both film’s shortcomings. The depiction of Pterodactyl’s inmates undergoing a full and prolonged body search for drugs upon arrival is toe curling in the extreme. Clearly done to emphasise Ishihara’s sadistic nature as she watches the examination on security camera playback, it causes repulsion rather than titillation or horror when viewed. Ultimately, these two curiosities will only be of interest to hardcore fans – anyone aesthetically-inclined should probably give them a wide berth.