Demons charts the bizarre events which befall the attendees of a horror film screening at a recently revamped Berlin movie theatre. An installation in the theatre’s foyer contains an ancient pagan mask which one of the guests, Rosemary (Geretta), tries on, scratching herself in the process. Predictably, Rosemary is soon transformed into a ravenous demon intent on infecting her close friends. Demons 2 continues the story some time later as the residents of a Berlin apartment block are reduced to monstrous, bone-crunching creatures after an ancient demon escapes from a televised horror film, with near-apocalyptic results. 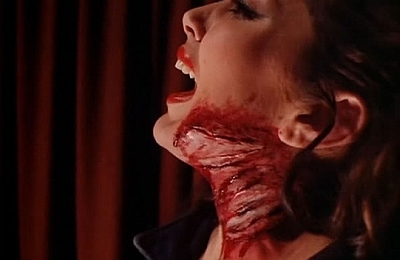 Demons and Demons 2 are classic (if that’s the right term) examples of what happens when any pretence at style or subtlety goes out the window, in favour of in-your-face carnage which is so over-the-top that it is no longer remotely scary, but just plain nauseating.

These two films are undoubtedly best-watched consecutively as their most interesting aspect lies in comparing their similarities, with Demons 2 a virtual retread of its predecessor save for a different setting and characters. The thematic reinterpretation of releasing the demons through film upon the unsuspecting public, and the passing of the demonic ‘disease’ by blood from those infected is the most original aspect of the films, and all that ultimately makes them worth viewing. Marginally better, Demons contains the best of the film’s deaths (though it doesn’t actually involve any demons), and is also the most atmospheric of the two, set as it is within the darkened movie theatre.

Even the inclusion within the newly-released DVD steelbook of a comic book entitled Demons 3, which graphically imagines a third nightmare instalment, can’t save the Demons films from being what they ultimately are – prime examples of the grotesqueness of cartoon gore at their zenith, and which should be viewed as pulp horror, before being speedily forgotten.