★★☆☆☆
There is much to admire in the approach London Film School graduate Kieron Hawkes has taken in writing and directing his debut feature Piggy (2012). Forgoing the traditional British gangster film tropes for a morally conscious (if skewed) mediation on the justification of violent retribution, Hawkes inaugural outing is at times taught, claustrophobic and thoroughly grim, but ultimately falls short of being a cogent whole.

Hawkes’ protagonist is Joe (Martin Compston), a shy and retiring twenty-something desperately trying to hold down a job and near non-existent social life despite his crippling inability to fit in with society. Unwilling to leave the comforts of his dilapidated North London flat, it takes the sudden reappearance of his beloved older brother John (Neil Maskell, fresh from last year’s Kill List and Dexter Fletcher’s Wild Bill) to bring him out of himself, also re-connecting with long-time crush Claire (Louise Dylan). 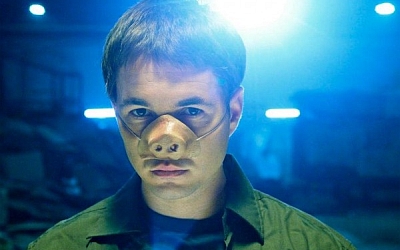 Tragically, during a fateful night out in a local pub, a disagreement between the two brothers and a gang of drug dealers leads to John’s brutal murder by Jamie (Ed Skrein), the outfit’s sinister leader. Joe immediately retracts into his insomnia-ridden, pot-smoking shell until one of John’s old school friends, who goes by the name of Piggy (Paul Anderson), turn up on his doorstep offering to help bring the murderous gang to justice. Energised by Piggy’s violent enthusiasm, Joe sets about avenging his brother’s death – but is his accomplice who he says he is?

Compston, Anderson and the ever-impressive Maskell all acquit themselves very well throughout Hawkes’ revenge thriller, and there are flashes of Shane Meadows’ gut-wrenching Dead Man’s Shoes (2004) in places – high praise indeed. Yet Piggy never quite seems sure of what type of film it wants to be, caught between being a social realist, high-rise drama and a gory stab/stamp em’ up. As the prancing, overly-theatrical Piggy begins to win the battle for Joe’s soul (like some pig-snouted, cockney Mephistopheles), the body count reaching intangible new heights and our shrinking protagonist appears seemingly won over by his partner-in-crime’s dubious didactic – less ‘an eye for an eye’, more a ‘boot for the skull’.

Hawkes and his competent cast of upcoming British talent display plenty of potential, but sadly Piggy falls short of being the genre-defying showcase it perhaps thinks it is.