The Bridge is Scandinavia’s latest crime thriller export, a Nordic noir collaborative effort from Sweden and Denmark revolving around the bridge between these two countries. This is where here Swede Saga Norén and Dane Martin Rohde, two cops from either side of the divide with very different skill sets, first meet. The pair discover a body, placed exactly halfway over the countries’ borders, comprised of two different women cut in half – one, a Swedish chairwoman, the other, a Danish prostitute.

Norén (Sofia Helin) is instantly captivating to the audience as she strides along the bridge in leather trousers with apparently no desire to bend the rules to allow a dying man to continue onto hospital. Here she clashes with Rohde (Kim Bodnia), an affable, relaxed detective who waves the ambulance through, much to the annoyance of his opposite number. Their differing characters are highlighted immediately, and we are well aware their partnership will be an interesting one. As Martin is welcomed into Saga’s team by her colleagues, they speculate whether anyone has warned him about her. 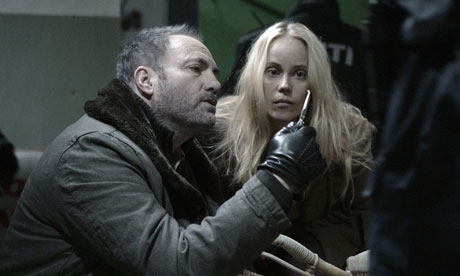 Within The Bridge’s fast-moving plot that consumes many a victim, it becomes apparent the team aren’t chasing your average homicidal killer (or killers). Whoever is behind the murders apparently has a strong political agenda and uses people in their plot like pawns to highlight the inequality different socio-economic groups experience in the hands of the law. A number of methods are employed by the enemy to manipulate situations whilst remaining anonymous, leading the investigators down various paths and keep the audience guessing.

Björn Stein’s screenplay is impressive, managing to create a range of believable, and often complicated, characters. Saga is particularly intriguing, and her unusual personality is never fully explained. There are several character traits that lead us to believe she sits on the autism scale, but Stein has since stated that only became apparent half way through the writing process and was not intended. Helin’s handling of the material is fantastic, and she even manages to bring out the humour in situations by playing up to Saga’s inability to recognise inappropriate behaviour. She shares great chemistry with Bodnia, who seems right at home in the character of Martin, a likeable easy-going detective but one who harbours darker shades to his personality.

Fans of Danish drama The Killing will be suitably satisfied with this pacey offering, or indeed anyone with enough patience to persevere through the darkness until plot threads start to come together. The Bridge be a little frustrating while the plot reveals its many connections slowly, but the resulting revelations are well worth the wait.