Gerald Thomas’ Twice Round the Daffodils (1962) is a classic example of what British cinema became known for during the 1960s (outside of kitchen sink dramas and Gothic horror) – old-fashioned, feel-good humour. Widely considered an unofficial entry to the Carry On canon, this comedy set within a TB sanatorium featured several of the iconic film series’ production staff including director Gerald Thomas, producer Peter Rogers, writer Norman Hudis and cult actors Kenneth Williams and Joan Sims.

Six male patients – Donald Sinden, Donald Houston, Kenneth Williams, Ronald Lewis, Andrew Ray and Lance Percival – are convalescing from TB at a country sanatorium. In order to proves themselves well enough to go home, they must manage to walk twice around a large bed of daffodils which forms the centre piece of the garden, just outside their ward window. During the ensuing months, barriers between the men break down and they become friends, whilst at the same time showing a healthy interest in the nurses who are there to look after them. 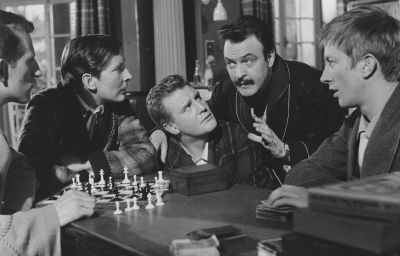 It’s extremely doubtful Twice Round the Daffodils could be made now. Fundamentally a ‘boy’s own’ tale with all the major characters male, it has an endearing naivety all-too-often missing from today’s ‘hip’ and ‘clever’ studio comedies. Its approach to humour could now be viewed as sexist and ‘non-PC’ by modern audiences, but it is done with such innocence and at the expense of the male characters – who often come out as the fools of the piece – that only a dyed-in-the-wool curmudgeon would fail to see its funny side.

The film’s other underlying beauty lies in its ability to hold your interest for the full 85-minute duration, despite the majority of action taking place within one room. As much an exploration of the six characters burgeoning friendships as of their schoolboy infatuations with the nurses who look after them, Thomas’ light comedy acts as an early showcase for the talents and pin-sharp comic timing of a group of character actors, many of whom would go on to become household names.

The release of Twice Round the Daffodils on DVD this week courtesy of StudioCanal is not only a perfect way to mark the film’s 50th anniversary, but also to remember a more innocent era of British comedy.