Originally aired in the UK back in 1962 under the name ‘Boss Cat’, Hanna-Barbera’s Top Cat remains for many one of the most cherished cartoon series ever made. His latest incarnation originates from Mexico and is so far one of the country’s most successful film exports. However, after being retrofitted into 3D and dubbed for English-speaking audiences, will this big-screen adaptation of one of the country’s most beloved characters resonate with older fans whilst also managing to appeal to a whole new generation?

The most effectual Top Cat, who’s intellectual close friends get to call him T.C (providing it’s with dignity) continues to cause havoc on the streets of New York. The antics of his gang of Manhattan alley cats (Benny the Ball, Fancy Fancy, Choo Choo, Spook and Brains) has angered the city’s new police chief Lou Strickland, who’s not at all happy with Officer Dribble’s inability to quash their raucous behaviour. 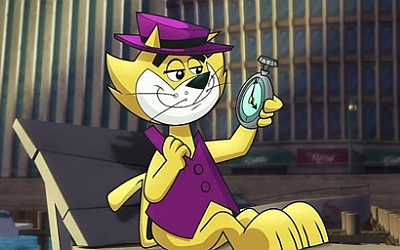 Utilising his collection of high-tech policing tools, Strickland manages to frame Top Cat for a crime he didn’t commit, simultaneously turning his gang of feline reprobates against him, resulting in T.C no longer being the indisputable leader of the gang. If he’s to ever again be crowned the boss, or pip, of the champion-ship he must confirm himself to be the most tip-top, top-cat by proving his innocence and saving the city from Strickland’s tyrannical regime.

Aside from some wry jokes and the odd piece of gutter humour, there’s very little about Top Cat: The Movie to entertain younger viewers. The recent success of Pixar has proved that child audiences are a lot more sophisticated and discerning than the industry originally thought and it’s sad to see such a cherished icon of animation history made to look old fashioned and dated thanks to a poor script which relies heavily on repetition an infantile humour.

For older audiences perhaps looking for a pleasant stroll down memory lane, Top Cat: The Movie offers a few deft touches of nostalgia (like retaining the film’s memorable and catchy theme tune) before unceremoniously spitting in their face with the type of flat, soulless animation which lacks any of the charm of the original Hanna-Barbera cartoons. Indeed, its perhaps the aesthetic style of the film which is the most grafting element on show, with the rushed 3D retrofitting only amplifying the film’s dubious animation.

Top Cat used to be the chief, the king but above everything the most tip top, top cat. Sadly, fifty years on his beatnik charm and charisma seem extremely out of place in a contemporary setting – perhaps signalling that it’s time for T.C to hang up his purple waistcoat and retire.