The problem with making a counter-terrorism film in a world that has already experienced Jack Bauer is that, in its eight seasons, 24 covered almost every single angle and plot twist that one could imagine for the sub-genre. So when Sean Bean’s grizzled and damaged ex-soldier is employed by a murky government agency to go off grid and dispose of some would-be suicide bombers in British thriller Cleanskin (2012), you can’t help but bring to mind CTU’s main man.

What director Hadi Hajaig has tried to do with Cleanskin is provide us a fresh angle and perspective on the murky world of international terrorism. We don’t just follow around typical counter-terrorist agent Ewan (Bean), but in parallel we also see the story of Ash (Abhin Galeya), the leader of the Muslim suicide bombers – referred to as ‘cleanskins’ by the intelligence authorities. Hajaig sets out to illustrate that it is not just Ash who is manipulated and used by higher powers (in his case, the nefarious zealot Nabil, played by Peter Polycarpou), but that Ewan is equally exploited by his own superior, in the guise of Charlotte Rampling’s McQueen. 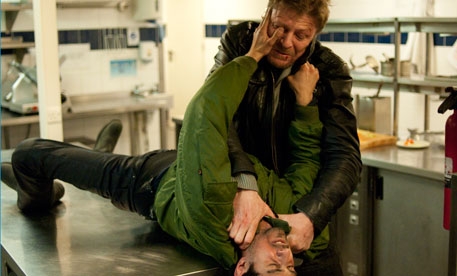 Unfortunately, despite such admirable intentions, Cleanskin simply doesn’t deliver on the moral questions it is attempting to raise, criminally undermining them with its machismo violence and heavy-handed themes. With the opening scene presenting a man having aggressive sex with a prostitute and about five different characters handling guns, the stage is very much set for what is to follow. This includes the aforementioned prostitute being beaten and a man set on fire – neither of which is handled deftly enough to highlight the repugnance of the acts.

The twists and turns of the film’s plot are sign-posted at a very early stage. If you’ve seen anything similar before – with neither of the central characters eliciting any particular empathy or going on a recognisable journey – it’s hard to engage with the material in any meaningful way. It’s initially intriguing to see how Nabil utilises Ash – who is already angry – and channels his pre-existing rage, but even this has been done before and better.

Perhaps a spot of polish to the dialogue would have helped the film feel a little less onerous and whilst the performances aren’t bad per se, they’re not especially good either, with Bean and Rampling feeling like they are mostly happy to phone in their respective turns. With none of the thrill or character of the famous counter-terrorist TV show, Cleanskin ends up with a plot just as ridiculous as those on seen on 24, despite Hajaig’s clear aspirational intent to do doing something different and interesting with the subject matter.