Malik Bendjelloul’s strikingly assured debut Searching for Sugar Man (2012) is a fascinating documentary founded on the remarkable true story of a seemingly unsuccessful musician who unknowingly – to both himself and his producers – became a national sensation on the other side of the world. It’s a story so unbelievable that it remains a conundrum as to why this extravagant rags to riches tale has until now survived undocumented.

In the 1970s, Detroit record label Sussex believed they’d struck gold when, through the ethereal mist of a down and out rock club, they discovered the enigmatic folk artist Sixto Rodriguez. Described as an inner city poet with a lyrical dexterity on a par with Bob Dylan, high expectations were placed on his debut album Cold Fact. However, the record flopped and when his second album fared no better he was quickly dropped and became just another failed musical prodigy. 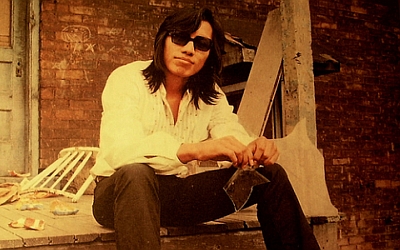 However, unbeknown to both Rodriguez and his record label, his first album somehow found its way across the Atlantic and into apartheid South Africa. During this period of heightened censorship Rodriguez’ anti-establishment lyrics struck a chord with a disenfranchised generation and quickly made him one of the country’s most popular artists. Due to his lack of success in the US little was know about Rodriguez in South Africa and numerous urban myths evolved concerning his disappearance, many of which pointed to a grotesque on stage suicide. One budding journalist set himself the goal of discovering the truth behind Rodriguez’s death and in doing so discovered a truly astonishing story.

Despite skipping over huge gaps in history and leaving a myriad of unanswered questions, the film has a delightfully catchy rhythm which manages to find the exact tone required for this fascinating detective story. An intoxicating rock and roll Cinderella story, Searching for Sugar Man’s tale of a man who went from obscurity to becoming a national treasure is a heart-warming documentary about holding onto your dreams and perhaps one of this year’s most enjoyable and accomplished films.