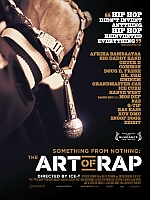 Tracy Marrow, better known as Ice-T, makes his directorial debut with Something from Nothing: The Art of Rap (2012), a comprehensive account of the cultural impact of rap music. Starting in New York, Ice-T tackles the origins of the genre through interviewing a series of pioneering artists and exponents, including Afrika Bambaataa and Melle Mel, in order to discover the conditions that facilitated the emergence of this new art form back in the 1980s.

This cogent introduction is by far the most fascinating aspect of the film, tracing the movement’s shift from the Bronx of the 80s to the global stage of today. From the word go, Marrow is adamant that this is a music documentary rather than a commentary on the rap lifestyle, though of course the two can hardly be kept separate. Redeeming itself at times through moments of well-placed humour, The Art of Rap disappointingly peaks and troughs in regards to how well it actually gets to grips with the roots of one of music’s youngest genres. 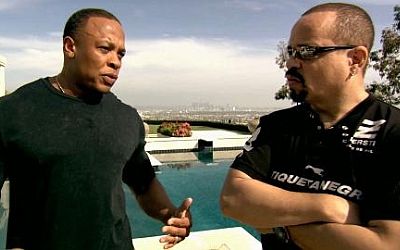 Multiple aspects of the industry are covered, ranging from how rappers actually write their songs, the MC battles referred to as ‘dozens’ (a name stemming from a tradition of the slave trade), through to the universality of rap, which incorporates both black and white artists. At various moments, Marrow stumbles across some genuinely fascinating material, even successfully explaining the misunderstood nature of the genre, so often associated with misogyny and materialism. In the process, he nobly attempts to include white, black, female and male artists from across the generations in order to paint as complete a picture as he can.

This well-meaning task leads, however, to the ultimate downfall of this interesting but weak documentary. At a number of climactic points, The Art of Rap appears to finish…only to carry on and on. This is mainly due to the fact that it has seemingly interviewed every single notable artist from both the East and West coasts, including Big Daddy Kane, Eminem, Mos Def, Snoop Dogg and Dr. Dre, to name but a few. The talking head sections vary dramatically in terms of quality – some funny, some informative, but far too many ultimately redundant.

As a whole, Marrow’s The Art of Rap just about achieves what it set out to do – to revaluate rap as an art form in its own right. However, it sadly fails to do so in an entertaining, visually-innovative or interesting manner, all the more surprising when coming from an individual whose music has reached so many during a long and illustrious rap career.