With cinemas across the world struggling to keep up numbers and profits (save the popcorn) it’s a genuinely odd thing to hear of a new cinema that’s surviving – and generating its own film lovers’ club around it. And an old, northern Victorian family pub, furnished with mahogany and brass, is definitely the last place you’d expect to find a cult cinema. Least of all, to find an arthouse that’s passionate about independent film…

The Black Lion is that very last place, in sunny Salford (the city with no city centre; the poorer, yet sunnier and older brother of glamorous Manchester). The old ex-pub hotel towers over the first few blocks of Chapel Street, and has been the drinking hole over its 120 year history to a few famous faces – dead and alive. Just to namedrop: “George Orwell, the entire Manchester United teams from the 60s and 70s; Shane Meadows, John Cooper Clarke”, says film director and co-founder, Mark Ashmore. 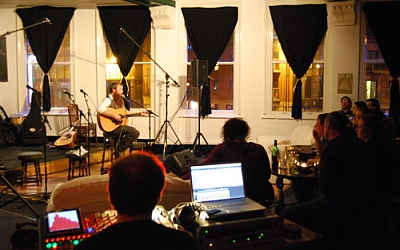 Celebrated pub landlord, Barry Phillips is co-owner along with film producer Jenny Inchbald. Mark and Jenny form a media company called ‘Future Artists’ which looks after the listings and populates the pub with its own co-op. “The Black Lion an old-hotel with three floors. While we didn’t mean to, we’ve found that our building reflects the Coppola family’s American Zoetrope building in San Francisco”, she says with a smile. Jenny later shares how opening her own cinema has been a childhood dream of hers.

The Black Lion’s second floor, ‘The John Cooper Clarke Theatre’ christened after its patron and muse, is home to a HD and 3D cinema space. The top floor hosts working studios and performance areas for fringe theatre and production companies. “Drinks and food served downstairs funds the art companies who use the venue upstairs. We’ve transformed it into a cultural powerhouse, really”.

Feature documentaries are particularly popular here in Salford. Alma Har’el’s Bombay Beach (2011) and the astonishing sell-out Bill Cunningham New York (2010) have been the biggest films so far, with classic screenings such as The Italian Job (1969) following closely in the pub’s audience ratings. The comment “I bloody love it here”, seems to echo a lot at the bar.

“In all seriousness, we’re an arts company surviving in the one place you’re not supposed to – right on the margins of where all the business money is. We’re the real Media City. We’re doing our very best to beat the recession, revive a pub and revive the cinema tradition in the UK. So far, it’s an excellent start, but there’s so much more to do”.