Irvine Welsh’s Ecstasy (2011) is an adaptation of the acclaimed Scottish writer’s novel The Undefeated, the third in a trilogy. Perhaps director Rob Heydon thought that Welsh’s name, coupled with the word ‘Ecstasy’, would kick-start an excitable response in fans of the cult smash Trainspotting, brought to the big screen in 1995 by Danny Boyle. But whilst Boyle has since moved on to bigger things, Heydon’s furiously flogs this dead horse, resulting in a clichéd, tedious 100-minute effort.

Set amongst Edinburgh’s clubbing scene, the film revolves around Lloyd Buist (Adam Sinclair), a keen raver in his late 20s who serves as a drug mule for kingpin Solo (Carlo Rota). His latest Amsterdam run inspires Lloyd to pocket the extras and sell them on but Solo finds out, doubles the debt and threatens Lloyd’s life. It’s also at this point that our blundering protagonist meets Heather (Kristin Kreuk), an unhappily-married Canadian. Lloyd is thus forced to embark on a risky final mission to get Solo off his and Heather’s back. 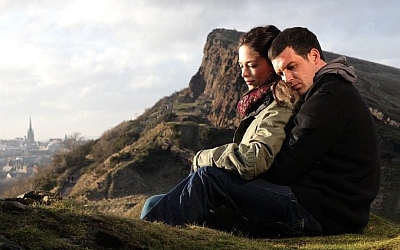 Canadian Heydon obtained the film rights to The Undefeated from Welsh back in 2000, yet filming on Ecstasy didn’t start until 2010. This condemned the project, as Heydon’s borrowed vision was outdated from the off, but that’s only one of many problems. Heydon appears to have little or no personal experience of clubbing culture in general, let alone in 1990s Edinburgh during its ecstasy high. This is most painfully apparent in the choice of music – tracks from Orbital, Primal Scream and Paul Oakenfold that potentially could have added kudos are utilised poorly, unable to gel with the visuals.

Welsh is celebrated for writing the type of characters you can believe in despite your moral reaction, yet Heydon’s adaptation is so devoid of any character development that you’re loathed to really back anyone. Antagonist Solo character is particularly under-written and unconvincing; the least intimidating drug baron one could encounter. Although Rota tries to maintain an air of menace, his scenes are by far the most repetitive.

Sinclair does a reasonable job as Lloyd alongside his wooden co-star Kreuk, but it’s only really former hobbit Billy Boyd’s Woodsy who has any real connection with the project. Woodsy’s attempt to rejuvenate fellow inmates in a psychiatric ward, proclaiming “My drugs are better than yours”, is perhaps the only true highlight. Yet even with the sorely-needed injection of humour from Boyd, Heydon’s Ecstasy should be given a wide berth.