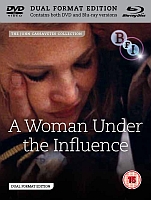 Regarded by many as John Cassavetes’ most successful and influential film, 1974’s A Woman Under the Influence is a sensitive portrait of a fractured domestic dynamic and a compelling examination of mental health. Rereleased this month on both DVD and Blu-ray courtesy of the BFI, A Woman Under the Influence remains one of the pre-eminent examples of intelligent and nuanced American independent filmmaking.

Focusing on the unusual behaviour of blue-collar couple Mabel (Gena Rowlands – in a performance which lead to a deserved Academy Award nominee) and her devoted husband, Nick (Peter Falk, most commonly known to UK audiences for his role as Columbo) A Woman Under the Influence delves into a Pandora’s box of sexual politics and how society perceives mental illness. An emotionally taught and affecting household drama, Cassavetes paints a fascinatingly naturalistic portrait of the effects of psychosis on a close-knit family. 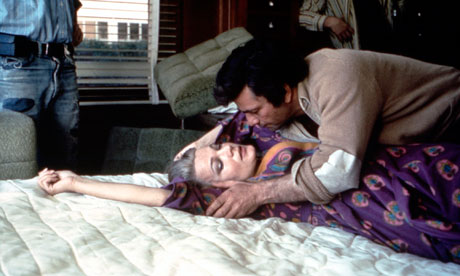 Cassavetes’ characters are all larger than life, especially Rowlands as Mabel, with her portrayal of a woman teetering on the brink of a mental breakdown only rarely lapsing into melodrama – instead culminating in a compulsive and often exhausting experience. However, despite Rowlands’ screen stealing turn, it’s Falk who deserves the highest praise for his intense and utterly convincing depiction of Mabel’s devoted husband. Falk is superb throughout, equally tender and sympathetic whilst clearly consumed by the anger evoked by this precarious situation and his prying neighbours/colleagues.

Capturing the love and tension which makes up the fragile composition of a household, Cassavetes’ considerate and compassionate exposure of the cracks we attempt to cover due to the imposed constraints of society is a powerful allegory for the brittleness of love within such rigid social restraints. Most noticeable, however, is how Cassavetes plays with the archetypal roles of the domineering husband and the irrational wife, stripping away the bravado of such roles to tackle archaic issues of male chauvinism and the role of woman in the household.

Apart from perhaps potentially benefiting from a far more ‘economical’ runtime, A Woman Under the Influence remains a culturally and historically significant piece of filmmaking, just as important and profound now as it was then. An exceptional film anchored by love and set alight with the unpredictability of mental health, this is a must for Cassavetes fans and newcomers alike.