The comedy feature debut from Aussie born director Boyd Hicklin, Save Your Legs! (2013) is an odd choice for a festival film, even if it is categorised under ‘Laugh’ in the new London Film Festival groupings, where it will undoubtedly find few friends on the festival circuit. Edward ‘Teddy’ Brown (Stephen Curry) is something of a no-hoper. He lives in his best friend’s garage and has an unhealthy obsession with cricketing legend Sachin Tendulkar (he once snuck into a changing room during a test match and stole the player’s protective box).

At the weekend, Ted acts as president of the Abbotsfield Anglers Cricket Club with his best mates, the cocksure thirty-something Stavros (Damon Gameau), and Rick (Brendon Cowell), a party-hard guy who always shows up hungover or stoned. Teddy has always dreamt big and when he gets the opportunity to travel to India with the rest of the team to represent Australia he leaps at the chance. But, with a team of misfits in tow, disaster lurks around the corner. 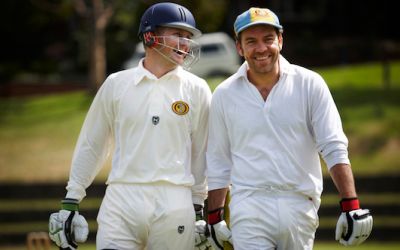 It’s hard to imagine a more witless and inane film than Save Your Legs!, which is ultimately a mash-up of arrested development, bromance and underdog stories. The three friends aren’t particularly convincing as mates of 20 years standing and there is little on-screen chemistry between Curry and love interest Anjali (Pallavi Shardi). Yet Shardi, along with fellow Indian actor Darshin Jariwala, make for the most enjoyable performances in an otherwise tiresome ragbag of clichés.

There is clearly an influence from the Hangover films, as we get 10mins of jokes about having a Delhi-belly, followed by scenes charting drug-induced meanderings through the streets of Mumbai, as well as all the ‘lads on tour’ jokes you can imagine. The idea of a group of Aussies abroad does allow for some picturesque photography as the team dart around India from Mumbai to Kolkata. It is also interesting that Hickin uses cricket as the basis for the film (admittedly very poorly realised), a passion shared with equal zeal on both sides of the hemisphere. Sadly it only ends up as a weak excuse for a tirade of comedy clichés.

At times the balance of racial stereotypes becomes a little too much, with odd one-liners thrown in about Hindu spirituality in a lazy attempt to provide some gravitas to this trite tale. With a wealth of material to drawn on in Aussie and Indian cricketing culture you might think that Save Your Legs! would be something of an all-rounder. Sadly however, weak writing and poor direction mean audiences won’t be left bowled over by this comedy.